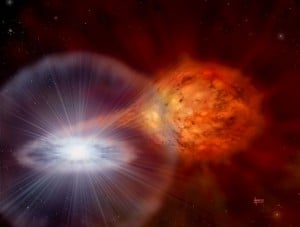 Using an array of 6 telescopes at Mount Wilson Observatory  astronomers have observed the expanding thermonuclear fireball from a “nova” that erupted last year in the constellation Delphinus. The observations produced the first images of a nova during the early fireball stage and revealed how the structure of the ejected material evolves as the gas expands and cools. The results of these observations, carried out by a collaboration of 37 researchers from 17 institutions and led by Georgia State astronomer Gail Schaefer, are published in the current issue of Nature.

A nova occurs following the buildup of a thin layer of hydrogen on the surface of a white dwarf—a highly evolved star with the diameter of the Earth and the mass of the Sun. The hydrogen is provided by a close companion, which is a normal star, in a binary star system where the two stars orbit about their center of mass.

As shown in the accompanying artist’s concept, the normal star sheds a small amount of its mass through a stream onto the white dwarf’s surface that gradually builds up a hydrogen “ocean.” When that ocean is about 650 feet deep, the enormous surface gravity of the white dwarf produces pressures at the bottom of the hydrogen layer sufficient to trigger thermonuclear fusion—essentially a stellar H-bomb.

In a typical nova, the light from the explosion will significantly exceed the star’s normal brightness and the object may suddenly appear to the naked eye in a location not previously noted to have a bright star. Over ensuing weeks, the star slowly fades as the fireball expands, cools and dissipates. Surprisingly, this seeming cataclysm on the white dwarf’s surface has no real effect on the star or its companion, and the flow of material will resume so that the detonation will likely repeat at a future date.

Because these objects are generally very faint until the explosion occurs, they do not appear on classical star maps. Instead, a “new” star suddenly appears where there was none before. The famous 16th-century Danish astronomer Tycho Brahe described this sudden appearance of a star in his 1572 book De Stella Nova, and the Latin “nova” for “new” became attached to this phenomenon.

On August 14, 2013, the Japanese amateur astronomer Koichi Itagaki discovered a “new” star that was promptly named Nova Delphinus 2013. Within 15 hours of the discovery and within 24 hours of the actual explosion, astronomers at Georgia State University’s Center for High Angular Resolution Astronomy (CHARA) pointed the telescopes of the CHARA Array, located on the grounds of historic Mount Wilson Observatory in the San Gabriel Mountains of Southern California, toward Nova Del 2013 in order to image the fireball and measure its size and shape. The size of the nova was measured on a total 27 nights over the course of two months; the first measurement represents the earliest size yet obtained for a nova event.

The CHARA facility uses the principles of optical interferometry to combine the light from six telescopes to create images with very high resolution, equivalent to that of a telescope with a diameter of 1,000 feet. This makes it capable of seeing details far smaller in angular extent than traditional telescopes on the ground or in space. It has the power to resolve the size of a U.S. nickel on the top of the Eiffel tower in Paris from the distance of Los Angeles, California.
Graphic Credit – Artist’s conception of a nova with a stream of matter being drawn from the donor star (right) to the compact white dwarf (left). © David A. Hardy / astroart.org