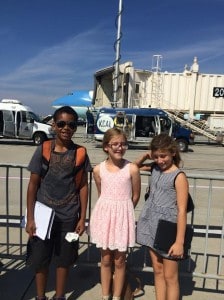 On October 10th, I, a Kids Scoop Media news reporter, traveled to the Air Force One departure spot at LAX airport with my cousin Larrina Ellison, as well as the founder and director of KSM, Michelle Mayans and other KSM colleagues. I was told I would get a chance to see President Obama board Air Force One. All of our names had to be cleared by the White House in order to witness this event. The other news reporters there were from KTLA 9, CBS and The LA Times. We were placed about fifty feet away from the plane.

While we were waiting for the arrival of President Obama, I met some very important, interesting people. These people included Secret Service members, policemen, and White House staff. The Secret Service members interested me the most because of all the exciting things you see them do in movies. A Secret Service member told me he had to go through the same training FBI members go through. This includes physical and surveillance training. They also must put in some detective work because that is basically what a Secret Service member is; a detective working for the president. I met another Secret Service member who I cannot name for national security reasons. The agent had been a Secret Service member for ten years and lives in Maryland. He says working for the Secret Service is an honor but also a big sacrifice. He has to travel away from his family all the time and ride in an uncomfortable private plane to meet the President at his various destinations. My group asked him what his favorite place to travel to is. He answered, “Africa.” Another thing that caught my ear is that whenever President Obama eats at a restaurant, a team of Secret Service members inspect the making of the food. How cool!
The most exciting part of the whole trip was watching the five helicopters descend from the air. There were five helicopters so people would not know which helicopter the president was in. Two of the helicopters were identical. They were both green and white. The other three were grey Marine helicopters. When they landed, I got butterflies of excitement in my stomach. My cousin and I got our cameras ready and the door of a helicopter opened. President Obama put on his swagger walk and came out with his shades on. He waved at my group not once, but twice. Once when he exited Marine One and the other time was after he climbed up the steps to enter the plane. I was amazed at how many other people had to get on the plane not counting the President. Some of these people included doctors, wardrobe people, press, the Secret Service, the White House staff.

When Air Force One lifted off, it got really loud and dusty. I had to cover my eyes. It was great being a reporter for Air Force One. It was a great experience I would definitely do again. Perhaps next time I’ll ride in Air Force One to interview President Obama.