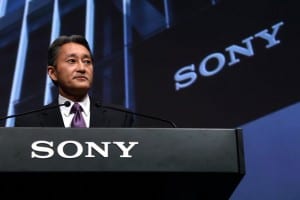 Loeb had sought a public sale of as much as a 20 percent stake of the entertainment unit, which includes the Culver City based film and TV studio and Sony’s music businesses.

“There will be less pressure on management with activist fund Third Point selling its Sony shares and having less influence on the company,” said Naoki Fujiwara,  Tokyo-based chief fund manager at Shinkin Asset Management Co., which holds Sony shares. “However, I think the general strategy of Sony won’t change with or without Third Point’s suggestions.”

In the letter this past week, Loeb credited Hirai with cutting costs in those businesses, personnel changes and improving the dialog with investors.

Two years into a turnaround effort at the Japanese electronics maker, Hirai is struggling to show progress. While Loeb’s Third Point LLC, which held swaps and convertible bonds, said it earned 20 percent on its $1.1 billion investment since May 2013, the common shares are little changed. Last month, Tokyo-based Sony canceled its dividend and forecast a 230 billion yen ($2.1 billion) annual loss.

Loeb’s departure follows setbacks at Sony that include a 180 billion yen writedown of the smartphone business and flagging demand for compact cameras. While Hirai gets credit for cutting costs, increasing transparency for investors and moving away from the personal computers, he hasn’t done enough, according to Loeb, who called unsuccessfully for the company to sell as much as 20 percent of its entertainment unit.

“They have a long way to go and we continue to believe that more urgency will be necessary to definitively turn around the company’s fortune,” Loeb said in a letter to investors yesterday explaining why he sold.

The company’s forecast, for a sixth loss in the last seven years, shows recovery remains a distant goal.

Shares of Sony rose 3.4 percent to 1,909 yen at the close of trade in Tokyo. The stock has gained 4.6 percent this year compared with a 5.1 percent drop in the benchmark Topix index.

Some of Hirai’s reforms have yet to take hold. Sony is splitting the TV-manufacturing business, a perennial money-loser, into a separate operating unit. The CEO has said Sony isn’t considering a divestiture of that business, while not ruling it out in the future.

“They are doing quite a bit,” said Brian Barish, president of Denver-based Cambiar Investors LLC, which oversees $11.5 billion in assets. “They had a market share and volume orientation to the hardware business that has finally gone away. And I think you will see the benefit of that in terms of profitability that is higher and more structural once we get into 2015.”