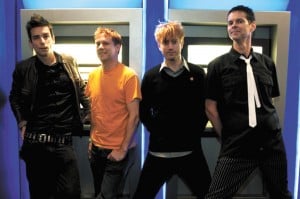 Undeniably one of the most important and influential gay music acts in the last twenty years, Pansy Division pioneered the “queercore” genre long before other gay musicians had the confidence to come out of the closet, and without major record label support or mainstream radio airplay. Antioch University will host a screening of the ground breaking ‘Pansy Division: Life in a Gay Rock Band‘ on Wednesday Oct. 22 at 6 pm, on the Antioch Campus at 400 Corporate Pointe in the Library on the fourth floor, free and open to the public. The film will be followed by a live acoustic set by Chris Freeman (of Pansy Division) and an audience Q & A.

Using original and archive footage and covering over fifteen years as a group, Pansy Division: Life in a Gay Rock Band is a fast-paced, intimate and humorous account of one of rock’s most fearless acts. From their first days in San Francisco’s underground music scene to a full-fledged stadium tour with Green Day and beyond, founding members Jon Ginoli and Chris Freeman overcome increasingly difficult line-up changes, prejudice and near-poverty to keep the band together and create music that has truly made a difference.

The film also examines issues that faced the gay community in the 90’s, as well as the adversity one encounters simply by being oneself.