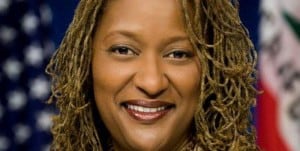 For fourth year in row Governor Brown has signed all of Holly Mitchell’s  bills sent to him.

Affixing his signature to the last of the 12 bills sent to him by Senator Holly J. Mitchell (D-Los Angeles) in 2014, Governor Brown once again sustained Mitchell’s 100% success rate for enactment of her passed legislation into state law.

As the end of September deadline approached for the Governor to decide whether hundreds of pending bills would become law or be vetoed, within the last few days he approved legislation by Senator Mitchell to:

Holly Mitchell had finished her three year tenure in the Assembly with an impressive legislative record – every one of her bills that made it to the Governor’s desk was signed into law – before she was elected to the Senate a year ago. Now in her fourth year as a state legislator, she has racked up a score of 38 signed pieces of significant legislation, not to mention her service as a member of the budget committees in each house.

Upon her election to the Assembly for the first time in 2010, Mitchell pledged to carry legislation rooted in common sense and substantive enough to make a difference in the lives of Californians. Mitchell advocated for policies that create real progress at a time when families and communities

“In the four years I’ve had the honor of serving my constituents and the people of our state in the Legislature I’ve learned to focus on what is do-able,” said Mitchell. “I’ve carried bills that improve access to critical services for those most in need, cut red tape and expand opportunities for working families. SB 1053 protects women’s contraceptive options in the face of the Hobby Lobby decision, SB 1010 ends the law’s discrimination in favor of those who abuse cocaine in penthouse suites instead of in the streets, and SB 1165 takes the educational struggle against sex trafficking to where it so often begins – in schools.”

Mitchell is perhaps best known for successfully carrying AB 2348 in 2013 which, by allowing nurses to disseminate contraceptives, expanded access to birth control in California as other states pushed to curb it. Her Assembly “Mitchell Plan” also increased CalWORKs funding despite cuts to other social programs.