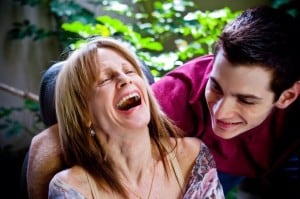 After weeks of seeing people posting their “ice bucket challenges” as a promotion to donate to the ALS Association, you might have wondered about the challenge of having Amyotrophic Lateral Sclorosis. ALS is a progressive neurodegenerative disease that affects nerve cells in the brain and the spinal cord. Motor neurons reach from the brain to the spinal cord and from the spinal cord to the muscles throughout the body. The progressive degeneration of the motor neurons in ALS eventually leads to their death. When the motor neurons die, the ability of the brain to initiate and control muscle movement is lost. With voluntary muscle action progressively affected, patients in the later stages of the disease may become totally paralyzed.

Born and raised in Culver City, Toni Joy Brown can tell you all about it.

“I was diagnosed in October 2010. I started having problems, (which I later learned were symptoms,) with balance and coordination and developed a limp in the later half of 2009. I was in the fitness industry and had been working out since I was 18 so fitness was my life. After being seen by various doctors with no diagnosis, I knew there was something very wrong with my body and even suspected I had ALS. As anyone would say after being diagnosed with ALS, it was the worst moment of my life.  I was just handed down a death sentence as ALS is terminal, it is just a matter of how long.  ALS affects everyone differently and the course it takes is different for [each individual].
You ask how the diagnosis affected my life. I went from doing everything a normal person could do to being confined to a wheel chair. Day by day my body lost the ability to do something it once did. Now I’m dependent 24/7, getting fed through a feeding tube. I think that pretty much says it all.

About two years into my disease I became much more open about it and started posting stuff about ALS on Facebook. From that time on i had a HUGE outpouring of love and support from my CCHS school mates. It was and continues to be amazing and has really given me the strength to carry on. People I barely knew or did not know at all sent me messages offering prayers and loving thoughts. Becky Houghten, who I barely knew, arranges a gathering of friends from high school to visit me. It is simply a gift from the universe that all these wonderful people have given me so much love and support.

The ice bucket challenge is a dream come true. Many people have no idea what ALS is. If they see 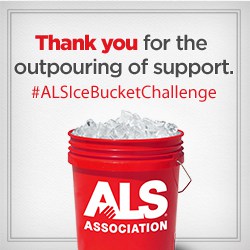 someone who has ALS in a wheel chair, they just look like a normal person so they have no clue what the disease entails. ALS is considered a rare disease – it doesn’t feel rare when you have it. It is rare because people who have it die; because there is no life prolonging treatment except to go on a ventilator.

If all the people who had ALS in the last ten years were alive still it would not feel so rare. Many people have objected about all the money being raised for this “rare” disease as a waste but what people don’t realize is that finding a cure for ALS will help find a cure for many other diseases. The ice bucket challenge brought long over due attention and awareness about a disease that has stayed hidden for the last 70 years because people just considered it a lost cause.

ALS is a horrible, horrible disease to those that have it and for the friends and family who have to watch a once vital person deteriorate day by day. Sure, all diseases are horrible but at least with most diseases there is hope and a possibility of a cure because enough people thought the disease was worth finding a cure or treatment. Please understand that ALS is worth having a cure. Those of us who have it are just like you, we never thought this could happen to us, it only happens to other people. Well, when you become the “other people ” that type of thinking doesn’t work so well.

Please make ALS a disease worth finding a cure by supporting walks and other events. It doesn’t have to be about money, you can donate your time. There are many great organizations; ALSA, which has a local chapter in Agoura Hills, Project ALS, Augies Quest, ALS-TDI. Make ALS your cause.

Photo of Toni and her son Noah by Ann Daniels