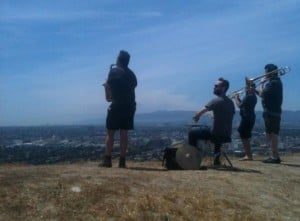 The Society for the Activation of Social Space through Art and Sound (SASSAS) proudly presents sound. at the Baldwin Hills Scenic Overlook, a concert premiere of three site-specific compositions by local artists Matt Barbier, Sarah Petersen and Southern California Sonic Ecology on Sunday October 5, 2014 at 4 p.m. Commissioned by SASSAS, and performed with the entire Los Angeles basin as a backdrop, these works offer an exciting aural re­imagining of this iconic and historically complex hilltop. Street parking is available along Jefferson Blvd., but come prepared for a steep climb up the Overlook stairs. Parking at the top of the hill is $6.00. Carpooling is strongly encouraged. Baldwin Hills Scenic Overlook is located at 6300 Hetzler Road, Culver City, CA 90232. For more information on SASSAS and this event, please visit www.sassas.org/ or call 323-960-5723.

The concert features trombonist and composer Matt Barbier, artist Sarah Petersen, and the artist collaborative Southern California Sonic Ecology (SCSE), in widely-varied responses to the Overlook. Matt Barbier, whose work explores experimental intonation, noise and the physical processes of the trombone, will debut a composition for brass and accordions based on a set of works exploring the imitation of pitch over distance and time and the unpredictable results created by their relations; Sarah Petersen, whose interactive project, Hums, explores the production of sympathetic vibrations in groups, will design a new participatory communal hum for the environment of the Overlook; and Southern California Sonic Ecology will create sonic collages using a combination of natural and ambient sounds sampled on site and played like instruments.

Since 2010, SASSAS has commissioned composers for its sound. concert series, the first of which celebrated the 25th Anniversary of the City of West Hollywood. In 2011, building a tradition that pushes new musical boundaries, SASSAS commissioned local musicians Alex Cline, William Roper, and Lady Noise to create three new site-specific performances for the Baldwin Hills Scenic Overlook that involved over thirty-three performers. In May 2013, SASSAS commissioned international duo MURAL to create a site-specific work for the Overlook that was performed collaboratively with nine local musicians.

This program at the Baldwin Hills Scenic Overlook is made possible in part by a Culver City Performing Arts Grant with support from Sony Pictures Entertainment. To further offset costs of producing this free public concert, SASSAS initiated a Kickstarter campaign that has been selected by an independent jury to be part of the newly launched Art Basel Crowdfunding Initiative. The project was mentioned in New York Times, the Kickstarter Blog and is featured on the Art Basel curated page. The $5,000 goal, to be met by Thursday October 2, 2014, helps pay artist fees and production costs.

The Society for the Activation of Social Space through Art and Sound (SASSAS) is a 501(c)(3) charitable organization that serves as a catalyst for the creation, presentation and recognition of experimental art and sound practices in the Greater Los Angeles area. Inspired by the resonance that occurs when experimental music is combined with unconventional performance environments, SASSAS seeks to foster new collaborations and improvisation to spark further exploration in the field. Programs include: sound. (annual concert series); soundShoppe (monthly workshop for experimental musicians); Ad Hoc (a project supporting touring musicians seeking to perform in Los Angeles), soundSpark (monthly children’s concert series), Kids Play. . . (workshop series introducing young adults to experimental musicians and composers), soundNet recordings (CD compilations drawn from sound. concerts) and our online SASSAS Archive.