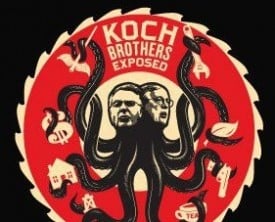 Culver City Democratic Club meeting will be screening an updated version of the  documentary ‘Koch Brothers Exposed’ on  Wednesday Oct. 8th at 7pm at the Veterans Memorial Building in the Rotunda Room 4117 Overland Ave.

Film maker Riobert Greenwald has updated his 2012 presentation to add in more information. Greenwald notes that “Billionaires David and Charles Koch have been handed the ability to buy our democracy in the form of giant checks to the House, Senate, and soon, possibly even the Presidency. The last time we exposed the Koch Brothers’ dealings to the world we here at Brave New Films wound up in their cross-hairs. They produced online ad campaigns attacking us, but, it takes more than a banner ad to slow us down.”

The film itself highlights the Koch brothers’ influence on the political process and incorporates ominous music and a narrator with a Southern drawl.  It focuses on their role in the Citizens United decision and their opposition to raising the minimum wage.  Roughly half of the 2014 edition includes new content, including interviews with Senate Majority Leader Harry Reid, (D-Nev). who has launched a crusade against the Kochs in Congress.
Greenwald continued, “We’ve reissued Koch Brothers Exposed in an updated version, Koch Brothers Exposed: 2014 Edition, to shine a light on them. We’ve delved even deeper into where their money is going, who their money is hurting, and how much they are making during this whole process leading up to the 2014 Elections.”
View the trailer: www.bravenewfilms.org/koch2014