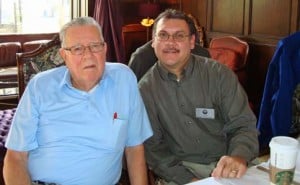 Edward C. Little, long-time Culver City Rotary Club member—among many of his community contributions—and the director of the Edward C. Little Water Recycling Facility in El Segundo, CA passed away last month at 87. Pictured left with Gus Mason of the West Basin Municipal Water District. Little is remembered by many for the accomplishments of his community activism and success in local politics.

Little’s contributions to the community are many. Following his years as a Culver City Council member in the 1960s, he went on to serve on the county Water Resources and Reclamation Advisory Commission, the Metropolitan Water District of Southern California, and West Basin. At West Basin, where he retired in May due to health reasons, Little’s achievements went beyond his leadership to diversifying West Basin’s water portfolio in the late 1980s and early 1990s. He was elected twice to the board presidency, and in 2007, the water recycling facility was named after him.
As a Culver City Rotarian for 64 years, Ed Little served as a past president of the club, and was on a major fundraiser committee for 25 years raising thousands of dollars to benefit the community. He was honored at the club’s 80th Anniversary with a Rotary Lifetime Achievement Award. He also contributed to the YMCA and the Hemophilia Foundation.
The Little family announced that his memorial service will be held  on September 27, 2014, from 11 a.m. until 2 p.m. at the Edward C. Little Water Recycling Facility 1935 So. Hughes Way, El Segundo, CA 90245

The family has requested that any donation in Ed Little’s memory be made to the Alzheimer’s Foundation of America. Reach them @ www.alzfdn.org/