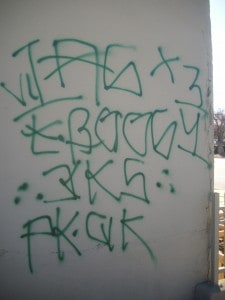 Last night at about 10:00 PM, ( August 31, 2014) Culver City Police Officers were patrolling the area of Playa St. and Hannum Ave. when they attempted to contact three suspicious subjects. After a short foot pursuit, all three of the subjects, who where gang members from the city of Inglewood, were detained.

It was later determined that five locations in the area, including a delivery truck, were vandalized by the suspects. Many residents witnessed them spray painting in the area and were about to call 911 as the officers were contacting the suspects. All three suspects were arrested for felony vandalism.