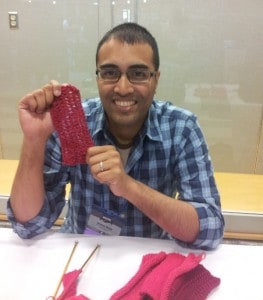 Senator Patty Murray (D-WA) last week introduced the “Not My Boss’s Business Act,” to restore the contraceptive coverage requirement guaranteed by the Affordable Care Act, put in jeopardy by the recent Supreme Court decision in Hobby Lobby. The Not My Boss’s Business Act was cosponsored by 46 Senators and endorsed by over 120 organizations.  Senate Republicans filibustered the bill, which then required 60 votes to proceed. The vote failed 56-43.   That’s only four senators short of over-riding this outrageous court decision. Is it time for bricks?

The Secular Coalition launched #KnitABrick earlier this month to harness outrage at the Hobby Lobby decision, create a striking visual impact for lawmakers and speaking directly to the craft store’s consumer base with the Knit a Brick campaign. So far they have received more than 210 bricks, from individuals all over the world.

The #KnitABrick campaign is so popular, they have extend the deadline for bricks through August 5th. (Pictured above, Hemant Mehta of the Friendly Atheist knitting a brick at the Secular Student Alliance East conference last week.)

Help rebuild the wall between religion and government by sending in or sponsoring your brick today. Knitted or crocheted 6″ x 3″ bricks are welcome.

The goal is to collect 400 bricks to bring to the Supreme Court, but with even more they plan to bring the wall to Congress and then the White House. Knit or sponsor your brick now.

For more info go to secular.org