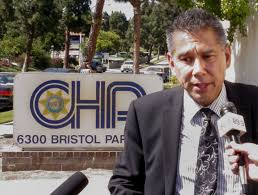 “The need for more (training) has been exposed,” CHP Commissioner Joseph Farrow said in an interview with The Sacramento Bee’s editorial board.

His remarks came two weeks after a unnamed officer was captured on video repeatedly striking a 51-year-old woman by the side of a Southern California freeway.

A passerby’s recording of the incident went viral and drew comparisons the 1991 Rodney King beating. A number of civil rights groups and Rep. Maxine Waters have accused the unnamed patrolman of using excessive force on an African-American person who may have been confused or mentally ill.

Minnie Hadley-Hempstead, president of the Los Angeles branch of NAACP, said she doubted inadequate training contributed to the confrontation between the officer and Marlene Pinnock, who was walking barefoot and reportedly veering in and out of traffic on Interstate 10 before the confrontation.

After Pinnock ignored commands to stop and twisted away from an attempt to restrain her, the officer took the woman down and struck her with his fists at least nine times. She was sent to the hospital with head injuries, according to an attorney who is representing her. A lawsuit is pending.

“Some things you can’t train,” Hadley-Hempstead said Monday afternoon. “The officer seemed so comfortable beating that lady. It sickens my soul.”

The patrolman in the video had received 12 total hours of training related to dealing with mentally ill people, Farrow said, including six cadet academy hours mandated by a commission that sets California’s peace officer training standards. The academy runs 1,000 hours.

All CHP officers took another six hours of training between July 1, 2013 and June 30 as part of a departmentwide refresher on the subject.

Topics of the training include accessing and communicating with mentally ill individuals and de-escalating potentially violent confrontations.

The officer in the video took his refresher training “in April or May,” said Farrow, who wants to increase training for handling mentally ill contacts to 40 hours for the department’s 7,300 uniformed employees.

“But there’s a give-and-take,” Farrow said, because putting officers in training classes takes them away from patrolling California’s freeways and unincorporated areas.

Farrow said the video captures just part of the incident and that his department is conducting an investigation.

“What was going on in the officer’s mind?” Farrow said. “That’s the question.”

Meanwhile, the officer at the center of the controversy has been reassigned to administrative duties.

The NAACP and other groups are skeptical that the CHP can police itself and have called for an independent investigation.

“(The officer) has done a disservice to the Highway Patrol, to black women and to people in general,” Hadley-Hempstead said. “That day should have been his last day as a Highway Patrol officer.”