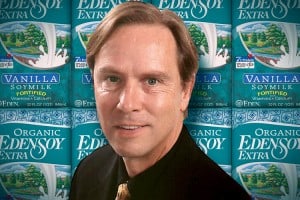 More than 80 companies have petitioned the courts for permission to use their owner’s religious beliefs to discriminate against women. That’s not surprising given the right-wing’s all out attack on birth control and women’s reproductive health care.

But what’s really shocking is that one of those companies is a well known organic food pioneer, Eden Foods.

Tell Eden Foods: Stop supporting discrimination against women. Michael Potter, Eden’s CEO, (pictured above) claims, among other things, that contraception “almost always involve[s] immoral and unnatural practices.”1 That’s one of the reasons why he filed suit in 2013 against the mandate of the Affordable Care Act that classifies birth control as preventative healthcare for women.

After filing the suit, he went even further, saying that the government has “no right” to extend coverage for birth control, comparing birth control to Jack Daniels, and saying that pregnancy should be covered but birth control should not because pregnancy has “more warmth and fuzziness.” [Yes, he said that]  When the Supreme Court’s Hobby Lobby decision was announced, Potter said he was “grateful” for the court’s decision while calling President Obama a “dictator” who wants to take away Americans’ rights.

Potter would like to frame his lawsuit as simply his attempt to exercise his constitutional right to freedom of religion, but there’s no denying that it’s actually part of a larger right-wing attack on women and women’s reproductive health. Potter’s case is being handled by the right-wing Thomas More Law Center. The center is engaged in 11 lawsuits for 33 plaintiffs challenging the contraception mandate. Michele Bachmann and Allen West serve as advisors and the center’s web site boasts that the center is “a crucial element on a crucial front of the Culture War.”

If Michael Potter wants to be part of the right-wing War against Women, that’s his choice, but consumers also have a choice about whether they want to fund his attacks. While progressives may have little leverage against a company like Hobby Lobby, our power to go up against Eden is strong. Potter himself said, when news of the suit broke in the spring of 2013, that consumer outrage was “a big deal.”

So, who does Potter think his customers are? Who is buying all that organic soy and bpa-free canned goods? Educated women, who have (in all probability) been using family planning their whole adult loves.

It’s time to make sure that Michael Potter knows the damage he’s doing to Eden Foods by joining coordinated right-wing attacks on women and birth control.

Tell Michael Potter: Drop your attacks on birth control coverage under the Affordable Care Act. Click the link below to automatically sign :http://act.credoaction.com/go/5101?t=6&akid=11122.5249094.Q0wKdb