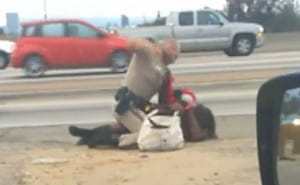 Assemblymember Sebastian Ridley-Thomas today joined with Senator Holly J. Mitchell to urge the commissioner of the California Highway Patrol (CHP) to conduct a thorough investigation into a CHP officer’s controversial arrest of a woman apprehended on the shoulder of the Interstate 10 Freeway in Los Angeles on Tuesday, July 1.

Senator Mitchell said, “Now is the time for fact-finding about the condition of the woman arrested and whether excessive force was used by the officers involved. If so, CHP needs to be held accountable for this incident and for preventing future incidents.” Senator Mitchell is chair of the nine-member California Legislative Black Caucus (CLBC).

A motorist captured the woman’s apprehension and arrest on cell phone video. A segment of the video appears to show an arresting officer repeatedly striking the woman in the head while she is pinned to the pavement. The arrest occurred on the shoulder of the 10 Freeway near the La Brea Avenue exit.

Assemblymember Ridley-Thomas said, “As has often been the case in the past, amateur video of a law enforcement arrest can be shocking to the public viewing it. In many cases, images caught on video by bystanders can lead the public and policy-makers to question the actions of arresting officers. In this instance, it is important to determine what happened, why it happened and whether it should have happened in the manner it occurred.”