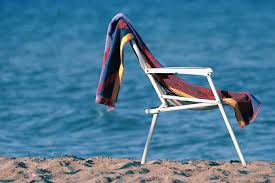 The Wisdom of a Time Out —

A friend recently decided to take a one week hiatus from his relationship rather than break it off right away. His partner agreed to it, and, they are currently experiencing a one week black out from all communication; no Texting, no FaceTime, no Facebook (besides lurking, I am sure), no phone calls, hoping that the short break will create an “absence makes the heart grow fonder” situation, as opposed to an “out of sight, out of mind” situation. I admired the wisdom of this process, and wondered if certain relationships in my past wouldn’t have been more successful if the “time out” method would have been employed, or, deployed, I should say, rather than the “that’s it I’m done” method.

It also occurred to me that, once you are married, “time outs” are no longer possible. You just can’t go around ignoring somebody who is up in your grill day and night, as much as we try to do it sometimes. They tell you not to go to sleep angry at your spouse, children or other housemates. And, it’s true; the minute you start doing that, you’ve got a downhill, or maybe it is more of an uphill battle. It becomes the beginning of the end of an otherwise good relationship.

If daters would take more time outs from each other, especially when they are young, they will realize, when the time comes, that the person you finally should be with is someone you would never want to “time out.” Another friend recently told me, “I miss my girlfriend, but…” That “but” can be deadly to a relationship, in my opinion. Why should two people over the child-bearing age ever have to live under a “but” situation? Life’s too short.

Another recent relationship revelation: people 50 and older have lots in common with people 30 and under! No wonder I get along so well with my twenty-something friends! People 30-50 are in that stage of urgency where they are somehow obligated by society, or by their internal time clock to be settled into a cozy routine with another human being. If you are under 30 or over 50, however, you realize that life is either a long road ahead with loads of experiences to gather, or that life was a long road of plenty of experiences gathered. You find yourself less tolerant of the compromise necessary to hold a family unit together.

And “time outs” are not only helpful with relationships; they are excellent monitors for work stress as well. There is nothing like closing up shop on a Friday and forgetting about work for the weekend. Biblically, we are taught that the sabbath was to be a time of rest once a week, to unplug and wind down. The idea of checking out for a little while is a wise, age-old custom. From the American TGIF night out, to the Japanese “Hana no Kin Youbi” (“Flower Friday,” better known as Pay Day) to the Jewish sabbath where you do no work or work-like pursuits, including activities like driving or writing. We are meant to be recharged and have gained new perspectives by the time we leap back into action.

Time outs from food can be equated with spirituality. You have the Jewish fast day of Yom Kippur, Muslims fast for parts of the day during Ramadan, and Christians give up certain foods for Lent. Buddhists practice intake austerity, and Hindus believe In the denial of the physical need of food for spiritual gain as well.

This term “time out” has been popular as a form of child discipline. When a kid gets too hyper, or misbehaves, you “time them out” to get them to modify their behavior. It never worked with my sons; as a family, we’re all in each other’s faces so much, that it proved hard to create separations. I was always amazed to see other kids accept time outs, though. Some kids would rail against it, “No, not a time out!” While others would sit patiently through the period, while its desired effect took over. The beast tamed, the child could come out and play again. It works in a classroom, too. Some kids get overstimulated in the presence of their friends, and are disruptive and/ or disrespectful to a teacher. A five or ten minute separation often works as a sort of reset, after which they can come back and participate in class. Speaking of school breaks, summer vacation in Culver City starts today. The whole idea, besides cost-saving, for school to be out over summer is an institutionalized time out, the ritual closure in June, and ceremonial fresh start in September (which, these days, for no good reason, has become August).

Vacations away from home are another form of time out. I travel so frequently that being away is a significant part of my reality of day-to-day living. I prioritize travel. This year alone, I’ve already been to: Barcelona and London, San Luis Obispo for a dance weekend, Salinas twice in search of Steinbeck, a bunch of times to the Bay Area to see my son away at college, and, for a period, semi-weekly visits to Santa Barbara and Costa Mesa for dancing, Palm Springs for a work conference, Mendocino and Mexico (the M trips) over spring break, and I will have gone to Israel, Catalina, Lake Arrowhead, and up and back to SF again several times before the year is out. I am already booking next year’s spring break to Budapest, Krakow and Prague. So, when someone recently asked me “what I’d rather be doing right now,” I immediately responded with a scene I had as my Facebook picture (until I recently replaced it with me on a hammock in Mexico) a very real, “sipping a caipirinha on the beach in Rio.” They seemed to like my answer. Closer to home: beer tasting at City Tavern in downtown Culver City, a glass of Chardonnay at Sapori in Marina del Rey, a Vino Tinto at Pintxo in Santa Monica. Shall I go on?

Make time for the time out!

For next week’s post, Ruth’s Truths will be reporting from Israel: the Land of the Book of Ruth, which, in Jewish tradition, is read at this time of year.