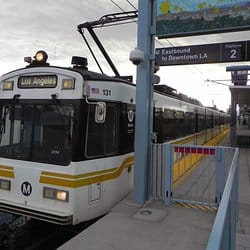 A vehicle collided with a Metro Expo Line train near Exposition Park on Sunday May 25, but only minor injuries were reported. The crash happened around 2:20 p.m. at Vermont Avenue and Exposition Boulevard, said Lt. Richard Hoffman of the Los Angeles County sheriff’s Transit Services Bureau.

Two people suffered non-life-threatening injuries and were taken to a hospital for treatment, said Erik Scott of the Los Angeles Fire Dept. He described the crash as minor.

The Expo Line was in single-track operation between the 23rd Street and Western Avenue stations, Hoffman said. Metro reported 20-minute delays as trains between Culver City and Los Angeles alternated directions on the remaining track.

No timeline was given on how long the delays would continue.