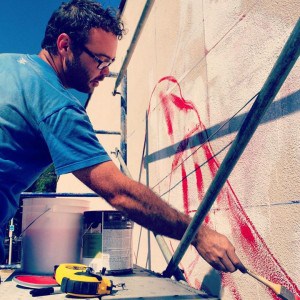 Starting on a Sunday afternoon, muralist Fintan Magee began work on the mural for the building at the corner of Lindblade and Sepulveda. Crossroads caught up with the crew as they finished rolling the scaffolding in front of the building; provocateur Dan O’ Brien, Magee and photographer Holly Port who was on hand to document the process.

Magee is an affable young man, happy answer a few questions about his art. “My parents were both artists, so I was raised in a  very creative home, and art has just been my thing since I was small.” He attended an art school in his hometown of Brisbane, but offered that’s he’d been very attracted to street art and graffiti.”It was a bit of a double life, for awhile, doing street art and and studying fine arts and painting, and then they eventually merged.”

Magee is an extraordinarily prolific artist, painting more than 200 murals since 2010, in places as diverse as Hong Kong and Sao Paulo. Some of his designs show the influence of his art school days, recalling Magritte and Duchamp.

When asked about how designed his murals to fit into specific spaces, he said “I can either use the location as a part of the design, or work around it. I always want the art to look like it belongs in the space.”

Dan O’Brien began the whole adventure by admitting he was just bored with looking at a wall. “I looked around on the internet for murals, and [Magee’s] stuff just really jumped out at me. So, I got in touch with him and we figured out the details, and here we are.”

Come by and watch the work in progress. Magee expects to be finished by Wednesday, May 28, after which he will be working with the AVPA art students at CCHS.