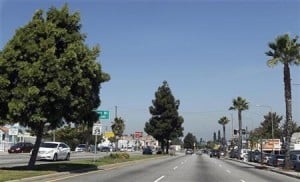 Crenshaw community advocates were informed for the first time in late January 2014 that the Los Angeles County Metropolitan Transportation Authority (“METRO”) planned to remove at least 150 mature street trees from Crenshaw Boulevard as part of the ongoing construction of the Crenshaw/LAX light rail line. The loss of these trees is in addition to the more than 250 trees uprooted to make way for the Space Shuttle Endeavour’s move to the California Science Center. “The removal of these trees represents a loss of green canopy on Crenshaw Boulevard for a generation or more of our children.  This is a serious social and environmental justice issue,” says Malcolm Carson, Community Health Councils’ policy director.

The environmental review process for the light rail line did not specifically disclose most of these tree removals, particularly north of 48th St., a potential violation of the California Environmental Quality Act (CEQA).  As a result, the Joint Task Force of the Empowerment Congress West Area Neighborhood Development Council (ECWANDC) and Park Mesa Heights Community Council, which formed to address the tree removal for transporting the Space Shuttle Endeavour in 2012, have questioned the City’s ability to grant the pending tree removal permit without additional environmental disclosure and mitigation.  The permit will be heard by the City’s Board of Public Works in Monday, April 14, 2014 at 9:30am.

Crenshaw Boulevard is considered a scenic highway from Coliseum to Slauson Avenue. METRO is seeking a permit from the Board of Public Works to cut down 98 trees on Crenshaw between Exposition and 48th Street in the upcoming week and later an additional 56 trees on Crenshaw between 48th and 67th Streets. In addition, thousands of feet of landscaped median will be removed.  South Los Angeles already ranks as the worst area in the City of Los Angeles for tree canopy cover, averaging less than 10% compared to the City’s average of 20.8%.

The Joint Task Force has met several times with METRO and City officials in an attempt to reach a settlement that would allow the project to go forward while also addressing impacts to the neighborhood from the tree removals. They will be working over the weekend, trying to reach a fair and appropriate mitigation plan. They are asking METRO and the City to replace lost trees with a full canopy, long-term maintenance, green and landscape medians in the surrounding area, and make sure that pedestrian access and parking are preserved and enhanced throughout the construction process and operation of the line.  “The community is looking for METRO to fully mitigate the impacts of these tree removals as quickly as possible,” says Ted Thomas, President of the Park Mesa Heights Council. “We can’t wait for years to begin to address the environmental and economic blight resulting from the loss of these trees.