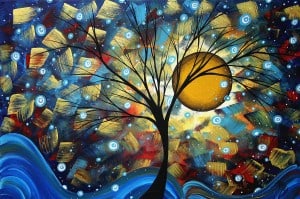 Serenity and the Jewish people: a Passover Essay —

I recently attended a sermon where the rabbi remarked, “Jews are not a serene people.” This comment was met with a little laughter and nodding heads, especially mine. People often note my lack of serenity. They admonish me, “take it easy,” “calm down,” “take a breath.” I often do feel different, and misunderstood, and I have only recently begun to realize that this difference might actually be 75% cultural, and 25% personality. Not to stereotype, but, I often notice this lack of serenity in others of my own kind. My Japanese “brethren,” on the other hand, are more serene, which may be why Jews, among Japan lovers, are overrepresented. I know I’m not alone. Oy, so maybe I won’t go around feeling like such an outcast all the time!

At school, we had a trainer who’s message was to remember that not every student comes from a background epitomized by, for example, a Catholic Church service. I’ve even been to a few of those; the priest does his thing up front, while the congregation listens in silence, except for prescribed moments when a group response is required. This is kind of like how a typical American classroom is structured. But it differs so greatly from, for example, a Southern Baptist type service, where call and response is expected, or Jewish services, where you stand up, bow, sing, or read aloud. Our Passover service actually includes the ritualistic “asking of four questions.” I’m just saying, we all have our differences, which can be appreciated, and do not have to be amalgamated.

So, why are Jews not “serene?” A friend suggested, “because we are taught from an early age to question, and to speak up.” Rolodexing through a list of world cultures, you’d be hard-pressed to find another culture that actually rewards argument as much as Jewish culture. Most societies I am familiar with, namely the Japanese, bring up their children to “tough it out,” endure, persevere and suffer in silence. When traveling, I sometimes play a game of trying to figure out the regional origin and/or ethnicity of groups of people seen from afar. I’ve found: the more taciturn a group of people at, say, a brunch buffet, the less likely that they are Jewish.

Jewish history is cluttered with scenes of expulsion, eviction and exodus. The sense of impending disaster not only gives us angst and shpilkis (a Yiddish word meaning “feeling nervous or rushed for no apparent reason”). We are propelled onto a quest to live life to the fullest. When driving in Israel, I found some of the road rules to be metaphoric. They have a warning light before the green, to prepare you to be ready to go immediately at the change of the light. They honk you right away from behind if you don’t get rolling quickly enough.

How are we expected to be serene, when danger lurks behind every curtain? Speaking of curtains, in my house growing up, my mother never opened the shutters that covered the windows at the front of the house. She was always afraid that “people might look in.” Not the serene lifestyle of say, a San Francisco Bay window with no curtains…you can look in and see the people living their lives (not Jewish).

And what Jew has ever gone to a religious service without passing a security check point at the entrance? My non-Jewish friends are incredulous when I tell them about this! Conversely, I accompanied a friend one year to Christmas midnight mass at the cathedral in downtown Los Angeles. Tons of cars were going in and out of the parking garage, unfettered by a security check point. I asked my friend where the guards were, and he looked at me quizzically. “We don’t have any,” he said, “nobody is after us.” Catholics have not been persecuted in quite a long time.

Without recounting the calamities that befell Jews in countries that we’ve inhabited, from Inquisition Spain to Hitler Europe to modern-day France or Argentina, it never ceases to amaze me how people who know very little if anything about Israel, and have certainly never visited, will tell you how much they “dislike” the place. Nobody runs around saying they “hate” Russia, or Iran, or any genocidal African nations. The Olympic Committee, for example, on many occasions, has determined, as my mom used to say, “one thing has nothing to do with the other,” and allowed the games to take place, for example, in 1936 Nazi Germany. But this particular article is not about anti-Semitism, it is about some of the affects this type of racism has had on the people it is perpetrated against.

My point is that it is difficult to be serene, when you are on the run. Shaky. Like a Fiddler on the Roof. Even at celebratory times, you worry about disaster waiting around the corner, so you never feel secure. You often end up on the defensive.

A Google search of the definition for “serene” pulled up: “calm, peaceful, untroubled, tranquil, composed, relaxed, at ease, unperturbed, unruffled, unworried, quiet, still, restful, relaxed, undisturbed.” I do feel serene right now, as I write from my hammock on the beach in Mexico…but it’s harder to keep it up in “real life.” Where are you on the serenity scale?