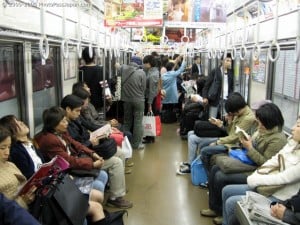 The Tokyoization of Los Angeles —

Culver Cit-izens are starting to ride our train system! Just this weekend, I went twice from Culver City to Pasadena, and I’ve taken the train numerous times to Downtown LA, and a couple of times to Hollywood. Back when the Blue Line opened up in the 90’s, I was among the first to take it from Downtown to Long Beach. I always like to pretend I’m in some other city, someplace that really has viable public transportation, like my other home town: Tokyo.

I just can’t wait until the metro connects up the Westside with the SF Valley (405 bypass). Then there’s the other big piece: connecting LAX airport with the rest of our metro services. If and when these issues are resolved, maybe I will cease stifling the primal scream I harbor about how we are light years away even from approaching the world’s best train system: Japan’s.

I have experienced the public transit systems in scores of cities across the developed nations of the world. Krakow, Poland, of all places, had a fantastic light rail system with covered areas for passengers to wait, and an electronic display showing what lines were coming and how many seconds until their arrival. Sao Paolo, Brazil had an extensive, clean, subway network with concessions selling everything from Havaiana sandals to food and drink in the stations. New York, it goes without saying, has a master subway network that gets you to virtually every inch of the city, although, if I recall, it did not connect up to the airports, possibly under the similar pressure we seem to be having here in Los Angeles: taxis and buses who do not want to lose business.

I will argue that nothing compares to Japan’s extensive network, crowned by their unique customer-driven mentality of timeliness, cleanliness and convenience. I believe it would have behooved Los Angeles to have supported our Japanese brethren, who have suffered through financial and natural disasters over these years, to have purchased some of their know-how, in addition to the “Nippon Sharyo” hardware that we utilize on our lines.

Let me get to what’s good.

First, our weather and, still, sparser reliance, as yet, on our metro, allows for bicycles to ride right along with us; I can’t see THAT happening in Tokyo; too many people. I think the bikes on the metro are a beautiful and unique sight! It is healthy, green and door-to-door convenient. Hand-in-hand with our paradigm change about metro riding, we are now becoming much more of a bike town, too. Our three-times-a-year CicLAvias have opened the streets to us, as have various city and county initiatives underway for bike lanes and bike rentals.

I also love the social aspects of the trains, so absent from our heretofore lives in LA County! I took three connections to Pasadena recently, had five different conversations, and exchanged ten smiles with people. If anybody ever worried about what “people” you might run up against on the trains, get over it! Imagine who you might be up against in cars, from speed demons, to drunk drivers, to drivers who are actually (developmentally) too young or too old to be on the road. I’d take my chances any day on who you might meet on the train! Not to mention the expense and hassles associated with parking, and the cost of gas, a metro day pass for $5 is cheaper than the two gallons it would take, minimum, to get across town in our fair city.

Finally, taking our train system is full of new experiences! New friends and maybe even bedfellows are made by deciding to take the train together, or taking the train one way, but finding someone else to take you back! Last Friday, a friend and I decided to buy the day pass for $5, because we planned on taking six transfers, three one-way, and three on the way back. When we ended up getting a ride back from our destination, we joked with our dear driver, “Hey you owe us 50 cents now! One way would have only been $4.50!” People show kindness by being willing to pick you up from or drop you off at particular stations.

Besides the camaraderie, you are, of course, covering NEW, uncharted territory, seeing parts of the city you may have never accessed from atop the freeways, where all you see is other cars and mountaintops. There is also the opportunity for NEW businesses to start up; now, as you traverse the streets emanating from stations, you have quiet, often shuttered, storefronts and buildings, whereas, in transportation-developed cities, you have concessions all the way from the platform, to in and outside of the stations, and the roads along with way to major destinations like a post-office, theatre, place of worship, museum or people’s homes, become prime property for stores, restaurants and other new businesses.

We can soon, maybe even already now recite the phrase from our Culver City-made classic, The Wizard of Oz, “There’s no place like home!”