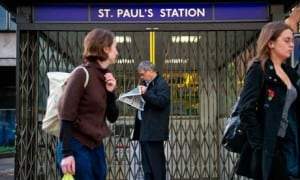 Hallelujah (word of Hebrew origin) the holidays (derived from the word “holy” of old English-German, meaning: sacred, consecrated or Godly) are over! Of course, everyone is happy for some time off from work, and I did use my vacation to travel to Europe this year. I’ll get to the tale of the rest of that trip later in this article, but not before a last word on my view of our year end holidays in general.

I started with my Scrooge-like little rant about the whole “Thanksgivukkah” deal a month ago. Then, readers last week heard about some of my wonderment at, in fact, HOW shut down London was at Christmas. Sorry, but, it’s just wrong to shut down all public transportation in a major metropolis. I’m sure there were some willing Muslims, Jews or Buddhists who would have been willing to work on the day, to provide at least limited service for people on Christmas, for chrissake. My final epiphany came upon arrival on New Year’s Day in Los Angeles, to the relatively quiet streets of my own home town. Normally, meaning, for most New Year’s Days since 1989, I have hosted a huge Open House, so I never ventured out much on the day. It occured to me that one reason people always liked my party so much was because everything else to do is shuttered down here as well.

Here’s what I think: shutting down stores, restaurants and attractions on holidays presumes that EVERYONE just wants to be home, spending time with family. What about the many, many people who either don’t have a special place to be, special people to be with, or, even, shared traditions? Some of our typical “best places to work,” namely, Trader Joe’s, posted signs saying, “we will close on…such-and-such a day…to allow our employees to spend time with their families.” Guess what? As an employee, I’d rather have the option to WORK for time-and-a-half, or, better yet, double time, than to be sent home to spend time with the family. Shutting down businesses instead of offering holiday pay is just a wolf’s cost saving method, cloaked in the sheep’s fur of employer benevolence. Oh how I love finding places OPEN on holidays; oh how we enjoyed our entrepreneurially prepared Indian food on both Christmas and New Year’s Eve in London!

I was last in London in the mid-90’s. To my eyes, it had changed a lot. In the past, I had found the place WASPishly…quaint. Now, it is a place of many more cultures and languages, which was refreshing in some ways, but seemed to be accompanied by the building of oodles of modern, glass-like structures. From the vantage point of the London Eye, I felt like singing (and did sing, to my kids’ consternation) “Chim Chimney” from Mary Poppins, but the skyline just really didn’t look like that anymore.

I’d heard lots about the place becoming trendy, which I saw in the form, mostly, of fancier eateries. London used to be infamous for bad food and warm beer. It was trendier, but to the tune of an unfavorable exchange rate that made it, frankly, prohibitive to eat a morsel of food, not to mention shop for anything. Travel tip: the flight options and fares in and out of London ARE perhaps the best for going onward to the rest of Europe and beyond (Africa, Middle East, etc), as long as you can hop in and out on public transportation (NOT an easy task this time, with holiday schedules and delays and construction to upgrade their archaic transport systems), and stay at hotels that honor your reservations (I so regret not staying for our second call back at our beloved Cable Street Inn – a reason in itself to stay in London a couple of nights), which our chosen Kensington hotel for New Year’s Eve did not! (Don’t ask…)

On to our sunnier, actually main, destination: Barcelona. I can’t say enough about how much we loved it. I’d been to Spain once in the 80’s: Madrid, Toledo, Granada, and Cordoba. From 1973 to the present, I have been to Europe literally countless times, but I’d never been to Barcelona, despite the fact that the mere mention of the word, “Barcelona” has always held an allure for me, as did “Rio de Janeiro.” In the year 2013, neither disappointed. In fact, I am having trouble figuring out which city I like better. Teacher that I am, here is my “grading” of Barcelona, on a comparative scale to other beloved destinations I have visited.

I like cities (Los Angeles being one of them) where you can speak Spanish to get around, which gave Barcelona some extra points over Rio, a Portuguese speaking destination. I have found that I also love places that would be physically beautiful without buildings or people, which puts the Mediterranean coastal port town of Barcelona on my list with Rio de Janeiro and San Francisco for dramatic mountains leading down to large waterways. But I am a sucker for the Mediterranean, with it’s unmatched history (I felt Israel, Italy and Africa across the water) so Barcelona, again, gets high marks.

Not an outdoorsy type, I’m a foodie, a shoppie, and a museum-goer, so I do love traveling to urban centers. Barcelona’s food is renowned, from tapas to paella, to the thick morning chocolate and churros, not to mention sangrias, cava, wines, and a killer caipirinha I had the first night! Prices were affordable enough to shop a little, and the Dollar-Euro was not as horrific a rate as in my recent past travels to Europe, so we were able to partake of some enjoyable shopping. Aware that our leather shoes often say “Made in Spain” on them, yep, they were still showing boots in delicious rainbows of colors, like the purple and turquoise pairs that jumped into my suitcase and came home with me. In terms of attractions and architecture, amidst plenty of museums and religious and secular buildings to see, I happened in on a Spanish guitar performance held in a church chapel. It was a special highlight for me, but especially for my boys who, “legal” abroad, went off on their own for a while, and met some travelers from Italy to hang with.

One sort of outdoorsy thing I do now is rent bicycles in cities; I’ve done it now in London and Tel Aviv, where the city rents them to anyone with a credit card. In Barcelona, the city ones are only for residents, but they have good old mom-and-pop-shops for bike rental as we do here in L.A., so we rode the streets of Barcelona on bikes one day: another highlight.

You do have to go out of the way to get to Barcelona, which is why I hadn’t visited before, despite my relative proximity to it during other Europe excursions. I am hereby stamping my approval on Barcelona as a place to visit again, as many times as possible. It is a place, even, to long for, along with what I believe to be her unofficial “sister cities” of Rio de Janeiro, Brazil; Venice, Italy; and New Orleans, USA (see my poem about these places elsewhere in Ruth’s Truths). Barcelona gets an A+.