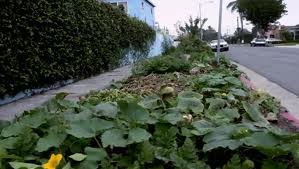 When new parkway regulations were first presented to Culver City council in May 2013, Transition Culver City members decided this would be a perfect time to re-imagine our parkways.

We interviewed experts in the field of sustainable landscape and to harvest their knowledge. With the assistance of Flowtown Films www.flowtownfilms.com/ , we decided to grow a parkway video.

Click here to watch Re-Imagining the Parkways: vimeo.com/7942427
For more information about the video project:
transitionculvercity.org/category/parkway-project/
To read the draft parkway ordinance:
www.culvercity.org/sirepub/pubmtgframe.aspx?meetid=854&doctype=Agenda
AND Public Discussions are being held in various locations in California so the public can weigh-in on proposed fracking regulations, but no meeting is scheduled in Los Angeles. With the US’s largest urban oilfield located in LA, we need to have an opportunity to be heard.
Please sign this petition, started by Citizens Coalition for a Safe Community
petitions.moveon.org/sign/california-hydraulic

Citizens Coalition for a Safe Community, 501c3, has been actively engaged since 2008 in the fight against the expansion of the Inglewood oil field in the Baldwin Hills having discovered documents that indicated hydraulic fracturing had been being used since 2002 to exploit oil and gas reserves from multiple depths at 3000 to 10,000 feet. The communities adjacent to the oil field in the Baldwin Hills and Culver City have seen the negative impacts of this expansion in drilling with structural damage to homes along with serious negative health effects such as asthma, different cancers and immune system diseases. Hydraulic fracturing will increase emissions of toxic gases by twelve fold and increase damaging seismicity and ground movement. A moratorium is needed now, “Do no more harm”.