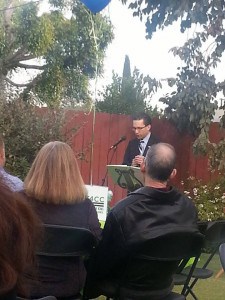 Christopher Patrick King launched his campaign for Culver City Council with an outpouring of positive energy and community support this past Sunday, December 8th. Current Culver City Rotarian and past Boy Scout Leader, Charles Perelman, hosted the event at his home. Supporters braved chilling 55 degree weather, but still filled the smartly decorated yard with over 70 in attendance to hear about King. The campaign is marketing itself in a more modern fashion to mirror its forward-thinking vision for Culver City’s future: CPK4CC, standing for Christopher Patrick King for Culver City.
The event was well attended by leaders of the community, in particular the education field, including numerous former School Board members and Culver City Unified School District teachers. King was energized by the turnout and support: “Seeing these faces out here today justifies that this campaign has a real purpose. We’re here to make Culver City an even better place to live, work, and play.”
Several community icons spoke on King’s behalf. The first was Dr. Ira Diamond, the founder and president of Shoes for the Homeless, Inc. Diamond is a local podiatrist and Culver City activist. Diamond and King met during a Culver City Homelessness Committee Meeting, a city committee on which King serves as vice chair. Their close friendship quickly developed. Diamond asked King to be a founding board member. King was honored and accepted the position. Through their work, Shoes for the Homeless, Inc. has donated over 6000 shoes in 2013 alone to the needy in Culver City and greater Los Angeles County.
The dynamic Rabbi Mark Borovitz, senior rabbi and spiritual leader of Beit T’Shuvah, a recovery program and congregation that helps recovering addicts, spoke next. The rabbi spoke about the five ethical principles that make King the best choice for Culver City Council. “Culver City needs Chris King,” he said.
Rabbi Mark is an inspirational figure for King and he played an instrumental part in King’s conversion to Judaism. Through the Rabbi’s influence, King was inspired to co-found the marathon team. “Team BTS” is now the only official jewish charity of the Los Angeles Marathon. King has coached the team over the last 5 years, and during that time they helped over 100 people, mainly those recovering from drug and alcohol addiction, cross the finish line at the Los Angeles Marathon. While not in recovery himself, King finds great personal satisfaction in directly helping make people’s lives better.
King proudly announced that he is a serious contender for City Council. He emphasized his life-long passion for public service, which his mother inspired in him as early as the 2nd grade. He is running because he feels like he “can bring more energy, more passion and a vision to make Culver City an even better place.” He plans to run with great tenacity, dedication and hard work: traits that have served him well thus far in his life.
King spoke of the importance of political participation during the April 8th election. People need to come out and participate in the democratic process so Culver City can elect the great leaders it deserves. This election could arguably be more important than others because the next council is due to work on a real vision for the direction of Culver City in the coming years, says King.

For more information on the candidate, please email him at [email protected], Tweet him @CPK4CC, or find him on Facebook at Christopher Patrick King.