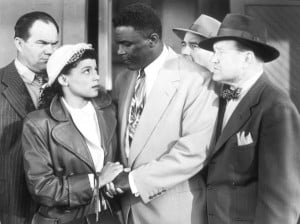 The Jackie Robinson Story directed by Alfred E. Green. The film tells the story of Jackie Robinson’s triumph in the sport of baseball during segregation and heavy prejudice. Robinson started his career in two Los Angeles based schools, Pasadena City College and the University of California Los Angeles before getting drafted to fight in World War II. After the war, Robinson played in the Negro Leagues until the Brooklyn Dodgers drafted him in 1947, making him the first African American to break the color line in Major League Baseball. The lead character is played by the man himself, Jackie Robinson, and also stars Ruby Dee as his wife, Rae Robinson. The Master of Ceremonies for the afternoon will be Lloyd Clayton and after the movie scholar Les Wills will lead a discussion on the film and the groundbreaking athlete, Jackie Robinson.
Screening is FREE! Saturday, Nov. 23 at 4 pm at Mayme A. Clayton Library and Museum
4130 Overland Ave. Culver City, CA 90230
310-202-1647
www.ClaytonMuseum.org