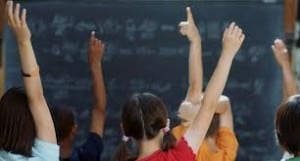 For nearly 25 years, television personality Art Linkletter hosted a show where he interviewed children and shared their often surprising responses. Bill Cosby continued the tradition in the 1990’s with his program, Kids Say the Darndest Things.

Well, kids ask the darndest things too. There’s a freedom from adult conventions that enables children to pose uniquely probing questions that can unsettle even professional politicians.

For the third year in a row, they’ll have that opportunity when they face Culver City School Board candidates at the ‘Ask 2 Know Kids Forum’ on Tuesday, October 29th, at 6:45 pm in West LA College’s Fine Arts Theatre – on the West LA College campus at 9000 Overland Avenue, Culver City, 90230 (doors open at 6:00 pm).

Only students will be allowed to ask questions – they will write some beforehand in their classes and put others directly to the candidates live at the forum. Students can also email their questions ahead of time to [email protected]

All Culver City students are invited to attend. There is no RSVP or ticket purchase required – the audience will be admitted on a first-come, first-served basis, with an optional donation requested.

Dr. Sanda Moldovan, who has a recurring appearance on the CBS TV show The Doctors, will MC the event, and two students will serve as moderators. There will be free LaRocco’s pizza, and an exciting “Sodapalooza” tasting with sodas from around the world. A silent auction will also take place to raise money for the ‘Ask 2 Know’ series and ‘Homeless Not Toothless,’ a charity that provides free dental care to the homeless and under-served.

‘Ask 2 Know’ is the brainchild of event producer Michelle Mayans, who came up with the idea after attending School Board candidate forums that she felt were neglecting the very people most affected by the School Board election – the students.

Mayans’ Kid Scoop Media company produces the ‘Ask 2 Know’ forums and other events that bring students together with celebrities, athletes, politicians, authors, musicians, and other successful leaders to give children exposure to enriching life experiences, positive role models, and the chance to express themselves and shape their future.