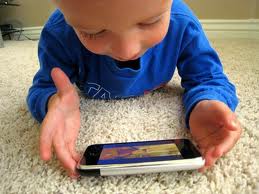 I was standing in line texting, waiting for a San Francisco restaurant to open at five o’clock. A woman stood in front of me, holding what looked to be a two- or three-year-old in her arms. We talked a little about the authenticity of the German food and the European ambiance of the restaurant. Then she asked me what time it was. Not sporting a watch anymore these days, I checked my iPhone for her and said, “4:59.” After thanking me, she explained, “I have my own iPhone, but, my daughter has it, and I just can’t take it away from her; it’s the only thing that calms her down.” That’s when I noticed that the toy the child was playing with was an iPhone.

Now, as an educator, let me say that a two-year-old cannot use an iPhone in any cognitively feasible manner, even if some kind of colorful game app had been downloaded for the child.

I was shocked, incredulous. I said under my breath, “When my kids were young, we didn’t have iPhones, and we found other ways to keep our children calm. The woman had already turned her back, and I didn’t want an altercation right there, on the streets of San Francisco. A woman behind me said, “What happened to books, toys?” and I nodded vigorously to her in agreement.

This encounter reminded me of another scene about a month ago: a four-year-old in a Korean restaurant with an iPad. The dad came in the room, and attempted to take away the iPad as the meal began, but when the child began to cry, the mother let her have it back. Excuse me?

When my kids were that age, a mere 15 years ago (they would have been 4 and 2 then), we brought out crayons, paper, books, trucks, action figures, Lego blocks and any number of amusements for car rides, waiting time at a restaurant, an airplane ride or, really, any “downtime,” anywhere. My kids were also allowed to watch television, videos, Laser discs (thanks to a relative in the business, we had many Disney and other classics on Laser disc), which were often educational and/or contributed to their cultural literacy. We started them early on The Wizard of Oz, they were Lion King babies, and they grew up surrounded by books and arts and crafts supplies. They had collections of cars, trucks, action figures and train sets; they put them together, took them apart, and made up stories surrounding these things.

My kids are not perfect because of this; they are perfect because they are my kids! They are not, however, addicted to devices, nor are they frozen into inactivity or boredom, like some of the young people I have encountered.

Has there been a generation yet, that has relied on electronics, instead of toys, to occupy a child’s time? The television generation that I grew up in was different. TV was only broadcast certain hours, with just a few channels, and consumption was usually restricted by parents. Author Ray Bradbury, who predicted many of current technological advances in his mid-century science fiction, worried about television becoming the opiate of the masses. He likened a neighborhood of tract homes with TV sets in the living rooms to fireflies in graveyards.

Bradbury’s predictions aside, TV grew into a media of varied educational and entertaining content, and certainly presaged the advent of portable types of television, like iPhones. TV was not and is not bad, nor are smart phones, although many people in my generation try to resist the tide, to my own consternation (and ridicule of them). The problem is the parenting.

What happened to the responsibility aspect of being a parent, the confidence of knowing what is best for the child? I recall a friend who wouldn’t bring her 3-year-old on a bike ride with us; we had a little ride-along cab for the kids attached behind the bicycles. She said she was “afraid he wouldn’t like it!” Three years old is too young to decide such a thing. Shouldn’t parents do their part in exposing their children to new experiences?

On a recent family outing, one of my sons asked my nephew to switch seats at the table, because he had his own ice cream, while us bigger people were all sharing one dessert. My 8 year old nephew had the audacity to say “no” to my 16 year old son. This time, it was my son’s turn for disbelief, he picked up the child, and moved him over. Some people advocate for reasoning with such a child, but, in fact, “no” is not an acceptable answer in, as we used to say in the business world, a “top-down” relationship. The problem is, you can’t physically move a person when they are too big to move anymore, so you have to nip such behaviors in the bud. Otherwise, it won’t get any easier to reason with a person later, and you certainly won’t be able to get a 14-year-old to budge.

Then there’s my niece, on the other side of the family. At nine, she announced to her mother that she was not going to take the entrance exam for a “better” school in their neighborhood. My sister-in-law called, asking what she should do. The recipe is: have a facts of life discussion about the need to strive for excellence. After which, if the child still does not comply, remove all amusement activities, from video games to TV time, to play dates, or whatever needs to be withheld, until the parents’ will is accomplished. Why? Because WE know better.
I am not talking about cases of abusive parenting; those are hopefully rare instances where, indeed, children might have to advocate for themselves. What I am saying is that there are way too many scenarios of parents abdicating their rights to make decisions for their children. Also, many parents these days seem just too willing to pacify their sons and daughters by plugging them in to external devices instead of instilling internal values.