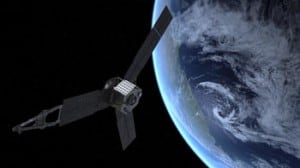 On Oct. 9, NASA’s Jupiter-bound Juno spacecraft made a quick pass by Earth to get a gravity boost and slingshot the probe towards its destination. The time of closest approach was 12:21 p.m. PDT, when Juno passed about 350 miles over South Africa.

As the largest planet in our solar system, Jupiter grabbed most of the mass leftover after the Sun formed. Dr. Scott Bolton of Southwest Research Institute is the Juno principal investigator, leading an international science team seeking to answer some fundamental questions about the gas giant and, in turn, about the processes that led to the formation of our solar system. Jupiter is in the outer solar system, about five times as far away from the Sun as Earth.

“Juno is a large, massive spacecraft,” said Bolton. The spacecraft has three large solar panels, measuring 9 by 29 feet, and a titanium vault to protect sensitive electronics from the harsh environment around Jupiter. “Even a large rocket couldn’t provide enough propulsion to get us all the way to Jupiter, so we are flying by the Earth for a gravity-assist that will provide about 70 percent of the initial boost provided by the Atlas V 551 rocket. The gravity assist essentially provides as much propulsion as second rocket launch.”

The Juno spacecraft was launched toward Jupiter from Kennedy Space Center on August 5, 2011. The rocket provided Juno enough speed to reach the asteroid belt, at which point the Sun’s gravity pulled it back toward the inner solar system. The Earth flyby gravity assist increases the spacecraft’s speed relative to the Sun from 78,000 miles (126,000 kilometers) per hour to 87,000 miles (140,000 kilometers) per hour.

“While we are primarily using Earth as a means to get us to Jupiter, the flight team is also going to check and calibrate Juno’s science instruments,” said Bolton. “As another bonus, Juno is approaching the Earth from deep space, from the Sunlit side. Juno will take never-before-seen images of the Earth-Moon system, giving us a chance to see what we look like from Mars or Jupiter. We plan to release a movie of this unique perspective of the Earth-Moon system shortly after the flyby.”

Juno will arrive at Jupiter on July 4, 2016. Once in orbit around Jupiter, the spacecraft will circle the planet 33 times, from pole to pole, and use its collection of nine science instruments to probe beneath the gas giant’s obscuring cloud cover. Juno’s science team will learn about Jupiter’s origins, structure, atmosphere and magnetosphere, and look for a potential planetary core.

Named for the mythological wife of the god Jupiter, who used her special powers to discover the secrets Jupiter was hiding behind cloud cover, the Juno spacecraft will probe the mysteries beneath Jupiter’s surface to understand its structure and history. Jupiter’s giant mass has preserved its original composition, perhaps providing a “Rosetta Stone” to explain more about the rest of the solar system as well.