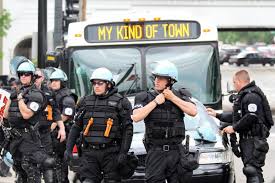 Tonight at 7PM, the Culver City Democratic Club is hosting a free screening of Academy Award-winning filmmaker Haskell Wexler’s Occupy-themed documentary, Four Days In Chicago at the Veterans Memorial Building, Rotunda Room. The film documents the Occupy Movement’s demonstrations in Chicago against the 2012 NATO Summit. Following the screening will be a Q&A with the film’s editor, Nicholas Golding.

Four Days in Chicago is lifelong activist Haskell Wexler’s personal look at Chicago over four days in May 2012 — four days filled with politics, protest and police. The Occupy movement, the National Nurses Union, Iraq Veterans Against the War, Code Pink and others converged on Chicago to tell President Barack Obama and Mayor Rahm Emanuel to stop the insane spending on wars around the world, and bring the money home for housing, schools and healthcare. The film criticizes Emanuel’s decision to bring police in from other states, and spend $27 million in security arrangements to secure the city against citizens speaking out. The protest was a huge event in Chicago, but received no national press coverage, save for sensationalized images of a menacing Black Bloc. Four Days in Chicago raises a key question: is the government of the people, by the people, and for the people — or is it of, by, and for the 1%?

Emmy Award-winning filmmaker Shane Stanley’s feature film My Trip Back to the Dark Side, a gritty crime thriller which premiered at the 2013 Marché du Films at Cannes. Nick Golding is a Los Angeles native and a second-generation film editor. After studying film at San Francisco State University, Nick moved back home to Los Angeles and was hired as an editor on Forty Deuce, a reality series being made by Golden Globe nominee Zalman King. Over the course of the project, the two developed a strong working relationship. Nick went on to edit all of King’s subsequent projects, most notably the feature films Dance with the Devil and Pleasure or Pain, and the Showtime series Body Language.

Most recently, Nick has had the honor of working with Oscar winning filmmaker Haskell Wexler. Under Wexler’s direction and guidance, Nick’s work has broadened to encompass themes of advocacy and social justice. The two collaborated on the documentaries Four Days in Chicago and Medium Cool Revisited.

The event will be held at the Veterans’ Memorial Building, Rotunda Room, 4117 Overland Ave., Culver City 90230. Refreshments will be served.