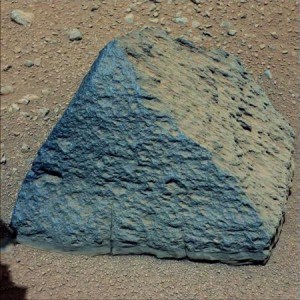 During the nearly 14 months that it has spent on the red planet, Curiosity, the Mars Science Laboratory (MSL) rover, has scooped soil, drilled rocks, and analyzed samples by exposing them to laser beams, X-rays, and alpha particles using the most sophisticated suite of scientific instruments ever deployed on another planet. One result of this effort was evidence that ancient Mars could have supported microbial life.

But Curiosity is far more than a one-trick rover, and in a paper published in the journal Science [www.sciencemag.org/content/341/6153/1239463], a team of MSL scientists reports its analysis of a surprisingly Earth-like Martian rock that offers new insight into the history of Mars’s interior and suggests parts of the red planet may be more like our own than we knew.

The rock was encountered by Curiosity a few weeks after it landed, during its slow drive across Gale Crater on the way toward the crater’s central peak, Mount Sharp. Visual inspection of the dark gray rock suggested that it was probably a fine-grained basaltic igneous rock formed by the crystallization of magma near the planet’s surface. The absence of obvious mineral grains on its essentially dust-free surface further suggested that it would have a relatively uniform (i.e., homogeneous) chemical composition.

For that reason, MSL’s scientists decided it would be a good test case for comparing the results obtained by two of the rover’s scientific instruments, the Alpha Particle X-ray Spectrometer (APXS) and ChemCam, both of which are used to measure the chemical compositions of rocks, sediments, and minerals.

However, the APXS came up with some unanticipated results. Far from being similar in its chemical composition to the many Martian igneous rocks analyzed by the Spirit and Opportunity rovers on the surface of Mars or to Martian meteorites found on Earth, Jake M is highly enriched in sodium and potassium, making it chemically alkaline.

Although Jake M is very different from known Martian rocks, Stolper and colleagues realized that it is very similar in its chemical composition to a relatively rare type of terrestrial igneous rock, known as a mugearite, which is typically found on ocean islands and in continental rift zones.

“We realized right away that although nothing like it had ever been found on Mars, Jake M is similar in composition to terrestrial mugearites, which although uncommon are very well known to igneous petrologists who study volcanic rocks on Earth,” Stolper says. “In fact, if this rock were found on Earth, we would be hard pressed, based on its elemental composition, to tell it was not an Earth rock.”