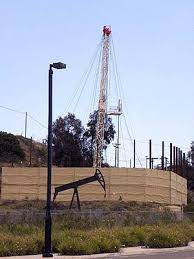 Culver City, home to NPR, Sony Pictures, and a hopping restaurant and gallery scene, is getting nervous. The Inglewood Oil Field — ten percent of which falls within Culver City — was recently purchased by mining giant Freeport McMoRan, and while the company denies that fracking is taking place, Culver City residents have reason for doubt.

From KCET’s REWIRE, The Well Next Door by Miranda Thompson also includes a video interview with Vice Mayor Meghan Sahli-Wells.

Prior to the sale, the former owner of the field conducted a viability study that sounds like a virtual dinner bell for hungry frackers. The report states that since 2003, sixty-seven wells were successfully fracked, and describes the tests as “representative of anticipated future hydraulic fracturing” on the field.

The California Legislature last week approved Senate Bill 4 that includes a handful of
regulations on fracking, but the bill (sometimes referred to as the Pavley bill for the Senator who proposed it), has garnered criticism from over one hundred environmental groups, including Center for Biological Diversity, Physicians for Social Responsibility, and the Sierra Club.

These groups are particularly outraged that the bill fails one simple logic test: While it calls for a public health impact study of the process, it simultaneously allows oil companies to keep fracking prior to the completion of that study. Just to put this in perspective, this is comparable to the FDA conducting a study to see if a new drug causes health problems — while simultaneously allowing pharmaceutical companies to sell that drug to the public.

For Culver City, passage of the Pavley bill gives Freeport McMoRan a virtual green light to frack in the Inglewood Oil Field, which raises particular concerns for residents about water safety. Golden State Water Company promises that they regularly test Culver City water for impurities, but since the Pavley bill allows oil companies to hide some of the ingredients of their fracking fluid as corporate trade secrets, there will be no way to test for those particular chemicals.

As confirmed in a special expose by the New York Times, gas from fracking has seeped into underground drinking-water supplies in Colorado, Ohio, Pennsylvania, Texas, and West Virginia. In addition, as the industry itself freely admits, anywhere from 10 to 40 percent of the water used in fracking returns to the surface. This toxic brew, given the benign industry term “produced water,” is then moved to underground storage wells. The big question is not if, but when these wells will eventually erode, and leak their contents into ground water.

If you’re new to the subject of fracking, you might reasonably assume that the federal government has studied the practice and deemed it safe prior to use. After all, it’s an industrial process that involves pumping known carcinogens not just down, but horizontally, octopus-style, under residential neighborhoods. Unfortunately, while a few government-sponsored studies are finally underway, fracking has been happening on a massive scale since it was federally deregulated in 2005.
The EPA is currently working on a comprehensive study of fracking, however it isn’t expected to be finished until sometime in 2014 — nine years after the nation-wide fracking boom began.

Meanwhile, the oil industry continues to develop and employ new and unstudied drilling techniques at a rapid rate. Acidization, for example, literally uses hydrofluoric acid to melt rock. (Hydrofluoric acid may sound familiar because it’s the stuff that bad guys use to dissolve corpses in TV shows like “Breaking Bad” and “The Sopranos.”)

This process is also the industry’s proposed technique for use in the Monterey Shale formation — a 1,750 square mile swath of land that runs throughout much of California.

When I asked if they are doing a study on acidization, or other new techniques, a senior California EPA scientist forwarded the question to the California Office of Environmental Health Hazard Assessment. “OEHHA has not conducted any public health studies on hydraulic fracking, steam fracking, and acidization and does not have any current plans for such studies,” wrote Sam Delson, Deputy Director for External and Legislative Affairs.

Until we have a president — and a California governor — who insist that all new drilling techniques are vetted for safety before use, and simply made illegal if they fail those tests, the only logical step is to ban these processes city-by-city. Fracking has already been banned in New York, New Jersey, and Vermont — as well as France, and parts of Germany, South Africa, Bulgaria, Romania, Argentina, Spain, Switzerland, Austria, Italy, Ireland, and the U.K.

In California, however, efforts to ban fracking have so far failed due to a lack of public pressure, and well-financed industry opposition. In the case of the Pavley bill, which originally included a moratorium on fracking, the oil and gas industry succeeded in manipulating lawmakers to work in their favor, and against public health.

Culver City is currently drafting legislation that demands a ban on fracking until it can be unequivocally proven safe — legislation that directly contradicts the Pavely bill. Similarly, last week, the Los Angeles City Council introduced a moratorium on fracking along L.A.s water supply route.

The motion has many hurdles to jump, and next is getting Council Members Gil Cedillo and Mitchell Englander on board. “If L.A. County starts to echo Culver City’s position on this,” says Sahli-Wels, “it could get us the national attention we need.”