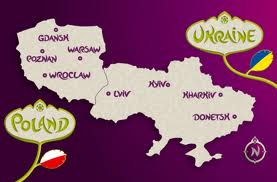 This essay is about “roots,” but not my “roots.” It does go back to “the old country,” though, to a part of Eastern Europe that was home to both my grandfather’s family, and that of my best friend from childhood. I will call her Nina, and her father, Maximilian, to maintain anonymity.

My relationship with Nina changed forever, one day coming home on the high school bus. To this day, I remember the moment she said to me, “my parents are pleased that I finally met a “nice, Russian, Catholic girl” for a friend. Being Jewish myself, this comment hurt.

I hadn’t thought of it for years, until recently, when we reconnected here in Culver City. I asked after her father, who is nearly 90. In recent years, I have undertaken the task of interviewing a few Holocaust survivors here and there, from among my relatives and friend’s relatives. It occured to me that, although not Jewish, Nina’s father had come from Eastern Europe after World War II. I asked if I might interview him.

I grew up knowing that Nina’s father, Maximilian, is a Ukranian by nationality, and (Greek) Orthodox by religion. Nina always seemed proud of her heritage. She told me stories about how sad it was that her extended family had been broken apart by the Iron Curtain, after World War II.

Different from the Jewish experience, however, after the Berlin Wall and Communism fell in 1989, a person could make a trip to the Ukraine, and find a brother within four days, which is what Maximilian did. I had heard these stories growing up, but with my more recent interest in learning about Holocaust history, I had questions to ask. 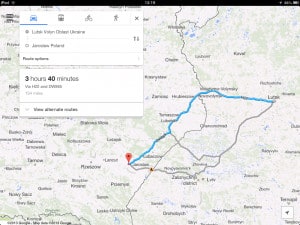 My mother called Maximilian an “old-school gentleman” and, “The Student Prince,” because he had attended Heidelberg University. Although I’d understood for the past 45 years that Maximilian was from the Ukraine, I found out during the interview that both of our fathers’ families were actually from South Eastern Poland. “Our” city, Jaroslaw, would have been (and is now) a few hours from her father’s city: Lutsk. The map here shows the distance from Jaroslaw to Lutsk, as well as the Polish-Ukrainian border.

Maximilian, the only parent still living of both Nina and I, has always been a kind, gentle, generous, intelligent, good man, who is loved by everyone who knows him. He would have been a teenager during the war.

First, I wanted to know what life had been like before the war. Maximilian spoke of his family owning a farm, and being relatively well to do thereby. As with the memories I have of my own family’s stories, he spoke of Lutsk having an important river in the town (the Styr) and a medieval castle. I pulled it right up on Google Maps, to find that although it is indeed now part of the Ukraine, it was actually part of Poland until 1939.

Maximilian, then and now, identified as a Ukranian, but he was actually a Polish citizen, with a Polish passport, just like my own grandparents. Jews, at that time, were not considered to be a religion or a race, but to be a “nationality,” like Ukrainians; both were Polish citizens. These days, the term we might use in the U.S. would be “ethnicity.”

For non-Jews, a key to possible survival just before the war was to have lived in Poland; the Soviets were far worse to landed “peasants” living in Soviet Ukraine, due to the Communist ideology of “collectivism.” The Poles, however, resisted Communism at the time. Significantly, Poland eventually played a key role in the eventual fall of Communism in the 1980’s.

Maximilian’s family farm would have been taken over by the state, and they may have at least been sent off to Siberia, but more likely been starved or killed by the government. Once the Nazis came into the picture and fought over this region against the Red Army, Jews were safer on the Russian side, while non-Jews sometimes found a haven that may have seemed preferable to Communist rule. For example, my father’s first cousins survived the war, because they were pushed across the San River into Soviet territory in 1939. Maximilian escaped the worst of the so-called Great Famine of the Ukraine by being in Poland at the time.

I asked about the Jews in the town of Lutsk. It is well-documented that Jews made up 50% of this town’s population, and Maximilian recalled this as well. I asked if he had known any Jews. He said no; the Jews kept to themselves, had their own schools, and did not live in the countryside, but rather the city center, where they were shopkeepers and business people. Just for comparison, Latinos currently make up almost 50% of the population here in Southern California. Can you imagine what it would be like to have 50% of a town’s population disappear?

I asked about how Maximilian eventually made his way out of the region. I don’t recall getting the full story of how he ended up with a full ride scholarship to Heidelberg University after the war, but Maximilian recalled a particular day that he had gone of his own will to Police Headquarters, but was then captured and taken to Germany, as a prisoner, at the end of August of 1943. After the war ended, he went on to the university.

That means that he was about 15 years old and living in the city when, on August 21, 1942, the Jewish women and children were taken to a place called Hirka Polonka and shot into a pit, while the men were taken to the courtyard of the castle mentioned above, and killed. I inquired about this event. Maximilian said that he heard the sound of lots of trucks one day, and his parents told him, “they are shooting the Jews.”

My childhood friend seemed a little shocked. She remarked, “You knew that?” and “I’d never heard this part of the story.” I believe that he could not have stopped what happened. I don’t blame him for the killing of the Jews or for how he ended up surviving, along with virtually his entire family intact, both during the war, and after it, even through all of the years of the Communist regime. It is chilling, however, for me to know that he was there on that day.

This is why I am so interested in interviewing people who lived through World War II, and our time is limited to do it. When you think about what would it have been like to go back into any time period, you sometimes romaniticize the era, without thinking about what your specific role might have been. People often say they’d like to go back to the chivalrous times of knights and princesses in England. But during their Crusades, which was an effort by the Catholic church to “reclaim” the “Holy Land” from the “Infidels,” the knights who may have practiced chivarly at home, raped and pillaged through the Rhineland on their way to the Levant.

Back to Nina’s comment about how her Eastern European Catholic parents would be happy with her new (Russian) Catholic friend. Whether for religion, ethnicity or national identity, I think that the chauvinism of “pride” creates systems of insiders and outsiders. Being relieved, or overly comfortable, when we form community with people of similar backgrounds harks back to “not knowing” our others. Let’s instead be joyous when we are afforded the chance to know people of different backgrounds.