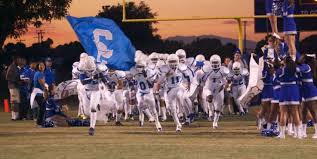 Surrounded by student-athletes from every sport, CCUSD will dedicate its new athletic facility. This unprecedented athletic field project included the removal of the school’s old concession building and installation of a new synthetic track; a beautiful new synthetic turf field, a new scoreboard, new field equipment and new ADA access to the field. In addition, new landscaping along Harter / St. Nicholas Avenue was planted, and a variety of miscellaneous repairs were conducted. The $4.85 million project was funded through a combination of Measure T, Redevelopment and Capital Projects funds.

The dedication ceremony will include a parade of athletes, the official ribbon-cutting and a ceremonial first touchdown pass. It will also include two special presentations:
• A plaque dedication honoring Coach Dave Sanchez, a longtime CCHS soccer coach, who passed away in February, 2013.
• A “Centaur for Life” recognition of former CCHS teacher, coach and athletic director Jerry Chabola.