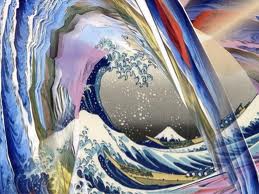 School started for us here in Culver City this week. In preparing my first day’s speech to this year’s students, I decided to speak not only of the four domains of English language arts, but of eight domains, once you add in “The Arts.” “Language Arts is reading, writing, speaking and listening; everything else is details,” I say. So what about grammar? It is part of speaking and writing. To this I have added, woven in, and integrated, the four domains of The Arts: music, theater, dance/movement, and visual arts.

Students were thrilled to share with the class that they create music with instruments and/or their voices! I found that I had whole bands or orchestras of students in my room! A handful of students in each class already dance and/or do martial arts. Some of them play sports, and I told them that the “moves” or “plays” you learn for soccer, basketball or football can just as legitimately be considered a “dance.” No sooner did I question the dance aspect of baseball, than I found an article called “The Swing” in an issue of Sports Illustrated; we’ll read the article together before the end of this week in class.

I attended what was called a “collaborative arts” event at the John Anson Ford theater the other night. While there, I scribbled down these eight domains into an arguable hierarchy. My goal is to have students debating, in speech and/or in writing, about which domain is the “highest” art form out of: listening, music, speaking, theater, reading, dance/movement, writing and visual art; I put them in that order, from low to high. Care to comment?

I believe that it all starts with LISTENING. There was a child talking through the entire first half of the performance I attended, before his mother mercifully took him home. I realized that he was not in a capacity to take in most aspects of the show, other than seeing small, relatively static (except for the occasional dancers) figures on the stage. The way I see it, before any arts or language arts concepts can be comprehended, let alone appreciated, a LISTENING environment must be created. I find it interesting that this not only relates to school, but also to the business world. Whether you are a salesperson, or a CEO, your ability to listen to your clients and/or employees, is the attribute that will set you apart.

After listening, naturally, comes MUSIC. You can obviously listen to music, and sometimes must read notes in order to play it. You can dance or move to it, and use your voice to produce it. Music could almost be the first rung on this ladder, but, if music is not heard – if nobody is listening – is it music? If you think about it, music persists to touch every domain: of course there is music in theater, sometimes if only to create mood. Music is sometimes improvised, but often written down after or while creating. Finally, I always play music while students are creating art, and asking students to draw what they hear in music is yet another type of (excellent!) assignment.

As with the performance I just attended, and, in fact, most musical performances, music often is punctuated by speech. If not specifically sung to (singing being both a part of music AND SPEAKING), there are usually introductions and explanations between musical pieces. At another performance I attended at the Hollywood Bowl earlier in the week, some of the best parts of the evening involved violin virtuoso Itzak Perlman showing off not only his violin prowess, but also his sense of humor and warmth, as he narrated throughout the evening.

What do you have when there is a listening audience, and, perhaps, a cast of people listening to each other with music and speech (dialog and narration)? You have THEATER. Theater Arts incorporates virtually all of the arts/language arts domains: from the writing and reading of a script to the choreography of the movement of characters on stage, and the art of set design, lighting and costumes. Indeed, all of the standards can and should be interwoven into a tapestry of overlapping Venn diagrams. Some of my students are involved in musical theater, so when I asked them to describe their best experience ever in any ONE of the eight domains, they found it difficult to stick to only one. It is ultimately debatable, and depends on the part you play in the process, about whether musical theater could be classified under music or theater. The point is, it is a worthy debate.

READING is next. It is already part of almost all of the domains, but to even get to the theater, you must read a playbill or ad for a show. It can include research about the performance and/or its actors, writers, directors, conductors, producers. You read the show program during and after the performance, and then read more about the story you saw or the instrument played. Improvisational performances may not require the pre-reading and memorization of a script or lyrics to a song, but most people on a stage, from a politician’s speech, to an executive’s presentation, to a front-of-the-class social studies or science project, require the reading of source materials at first, and, eventually, notes.

The next three standards are the icing on the cake; they are, similar to certain parameters of Gardner’s multiple intelligences, the highest level of arts/language arts expression, both as support for the above four standards, as well as standing in their own right.

Next in line (pun intended) is DANCE and/or movement. Interpreting music, speech or something read into physical movement requires commitment of not only mind, but body. You must be able to listen carefully and break down music into parts, then create a meaningful representation of those parts, utilizing hands, feet, legs, arms, and other body parts to demonstrate the sounds. Even people who are hearing impaired, or deaf, can still enjoy a musical performance, if they can see dance and movement.

Finally, there is the WRITING. Many will argue that writing must come earlier, perhaps even before music. Music is written, speeches are written, scripts and agendas manage theater, and anything read is written. Writing allows for creation, reproduction, and documentation. Writing is the highest form of language; it requires craft to produce, and, like visual art, it can be seen and touched. It is made to last forever.

Last, but not least, is VISUAL ART. This includes all manner of illustration, painting, photography, film making and viewing. It also includes crafts like paper folding, mosaics, crocheting, sculpture and many other forms. Either as an inspiration to spur all of the other seven domains, or, after the other standards have been met, or as a supplement to the other standards, visual arts is the requisite piece of the puzzle. I have taught a blind student in my regular Language Arts class, and I insisted on having him participate in my visual arts lesson about the Japanese artist Hiroshige and woodblock printing by having a few of Hiroshige’s prints translated into Braille. The student was able to “see” the detail of the paintings. Further, the Hollywood Bowl performance I attended, which also involved symphony music, violin solos and singing, did not include dance. One criticism among us was that an artist’s (for example, Chagall’s) work superimposed on the white background of the amphitheatre’s half dome, would have lended a music fuller experience. The performers kept talking about places in Eastern Europe that the composers of this or that melody had come from; photos, maps, artwork, would have made it more three-dimensional.

California state teachers are busy now aligning their curriculum with the new, so-called “Common Core Standards.” These may be the standards used for a new type of testing (less multiple choice, more short answer), but a rich, arts-filled, English curriculum will always enable students to meet these academic goals and then some.