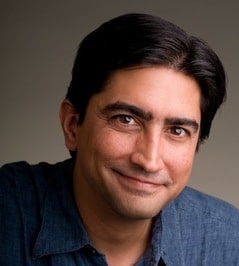 Arun Rath will be the host when the NPR newsmagazine “Weekend All Things Considered” starts airing from Culver City in September. Rath is a senior reporter for “Frontline” on PBS and PRI’s “The World” at WGBH in Boston. A lot of reporters and hosts in public radio and beyond applied or took a look at the position according to Kevin Roderick at LA Observed.

From NPR – “Weekend All Things Considered manages to cover the full range of human experience in an hour,” says Rath. “It’s hard work but the payoff is amazing. I’m especially excited to join the show as it reinvents itself at NPR West. The intense diversity of Los Angeles is invigorating – all the racial, economic and political diversity smashed together – it’s what’s best and most exciting about America.”

Rath began his journalism career as an NPR intern at Talk of the Nation, eventually joining the staff and becoming the show’s director after working on several NPR News programs during the 1990s. In 2000, he became senior producer for NPR’s On the Media, produced by WNYC, where he was part of a team that tripled its audience and won a Peabody Award. He spent 2005 as senior editor at the culture and arts show Studio 360 from PRI and WNYC. Rath moved to television in 2005 to report and manage radio partnerships for Frontline; he also reports on culture and music for the PBS series Sound Tracks. At Frontline and The World, Rath specialized in national security and military justice. He reported and produced three films for Frontline, the latest being an investigation of alleged war crimes committed by U.S. Marines in Haditha, Iraq.

“Arun has that rare constellation of skills that will make him a first-class host,” says Margaret Low Smith, Senior Vice President of NPR News. “He has editorial depth and range. He is relentlessly curious. Plus he is wonderful on the air. The audience will love spending weekend afternoons with him.”

The relocation of Weekend All Things Considered to NPR West in Culver City, Calif., in September will offer the program expanded access to a whole new range of stories and sources drawn from the area’s strong entertainment, international trade, science and technology industries. The move also provides NPR with a greater presence in the west, allowing it to respond even more quickly to news from the region. Rath and the staff of Weekend All Things Considered will join a team of journalists and support staff at NPR West, including Morning Edition host Renee Montagne, national correspondents Mandalit Del Barco, Kirk Siegler and Ina Jaffe; and Karen Grigsby-Bates and Shereen Meraji with Code Switch, covering race, culture and ethnicity.