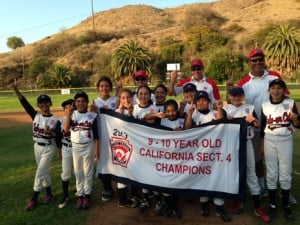 After being crowned District 25 Champions, the girls faced off at Sectionals this past week against softball powerhouse District 37’s Westchester Del Rey Little League. The girls played a great game and held Westchester to a 1-hit shutout thanks to great pitching, catching and defense. With the win, the girls have now advanced to the Division III Southern California Championship Tournament in Riverside. Congratulations girls!

Games will be held at Jurupa American Little League, 4700 Agate St, Riverside, CA, 92509, beginning Saturday, July 13 at 12 Noon. Game information and tournament bracket can be downloaded below or viewed at www.culvercitylittleleague.org.

Download the Tournament Bracket and come out and support our girls!

Culver City Little League is a non-profit, all-volunteer organization, offering baseball and softball programs to more than 500 children, ages 4-13, every season. Little League Baseball and Softball is the world’s largest organized youth sports program, with nearly 2.4 million players and one million adult volunteers in every U.S. state and scores of other countries.