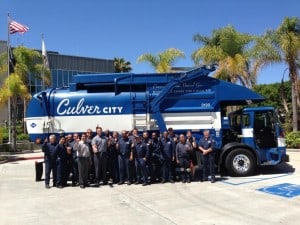 The City of Culver City has been named the #1 Best Municipal Fleet in North America, by the 100 Best Fleets National Fleet Certification/Recognition Program. Government Fleet publication representatives presented Culver City with this prestigious award at
the Government Fleet Expo & Conference held in San Antonio, Texas earlier this month. This achievement is awarded to only one of a large number of government fleet organizations in recognition for outstanding contributions and leadership, particularly in the advancement of accountability, efficiencies and use of technologies. Award-winning fleets maintain high standards of operations, while demonstrating consistent
sustainability practices.

The highly competitive 100 Best Fleets in North America program is open to all federal,
state, and local government fleets in North America, based on a comprehensive set of
criteria, specifically tailored to the challenges and requirements of government fleets.
All of the 38,000 public fleets in North America which may compete for this recognition
are measured against these carefully established criteria set by industry leaders and
past winning fleets in 12 specific categories:
• Accountability   •   Technology implementation
• High trust culture   •   Acknowledgement
• Collaboration    •   Creativity
• Celebration    •   Doing it right the first time
• Quick/efficient turnaround  •   Staff development
• Resource stewardship  •   Competitive pricing

Culver City has been a progressive leader in its commitment to maintaining a highly
efficient operation while embracing the environmentally friendly use of natural gas as its
fuel of choice for its entire fleet.   In addition to a significant reduction in greenhouse gas
emissions, use of natural gas conserves over 800,000 gallons of gasoline and diesel
fuel per year and saves taxpayers more than $1.4 million dollars annually. Culver City’s
fleet includes refuse and public works trucks, standard autos, fire apparatus and transit
buses.

The City’s fleet operation is certified with the State of California as a “Green Station”
under the Department of Toxic Substance and Controls.  “Culver City has an aggressive
fleet operations program that complies with a 100 point recycling program approved by
the State of California.  Our program includes the proper management of all waste,
including the recycling and environmentally sensitive handling of oils, fluids, and
metals,” says Culver City Mayor Jeffrey Cooper.
Along with this year’s #1 Best Fleet recognition, the Equipment Maintenance & Fleet
Services Division of the City’s Transportation Department was awarded the prestigious
#1 Best Government Green Fleet Award in 2009 and was named the 3rd Best Overall
Fleet in North America for 2012.  The Division has also been awarded the Natural Gas
Vehicle America Leadership Award in 2008, and is a three-time winner of the
Environmental Leadership Award.  Culver City has been ranked as one of the top 12
fleets in North America since 2006.  For more information about these awards or the
Culver City Transportation Department’s Equipment Maintenance Operations Division,
please contact Paul Condran, Fleet Services Manager at (310) 253-6520.