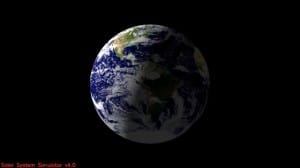 On July 19, NASA’s Cassini spacecraft will be turned to image Saturn and its entire ring system during a total eclipse of the Sun, as it has done twice before during its 9 years in orbit. But this time, the images that will be collected have been specifically designed for something very special. They will capture, in natural color, a glimpse of our own planet next to Saturn and its rings, taken from nearly a billion miles away.

“It will be a day,” says Cassini imaging team leader Carolyn Porco of the Space Science Institute in Boulder, Colorado, “for all the world to celebrate.”

“Ever since we caught sight of the Earth among the rings of Saturn in September 2006 in a mosaic that has become one of Cassini’s most beloved images, I have wanted to do it all over again, only better,” says Porco. “And this time, I wanted to turn the entire event into an opportunity for everyone around the globe, at the same time, to savor the uniqueness of our beautiful blue-ocean planet and the preciousness of the life on it.”

Porco was also involved in co-initiating and executing the famous “Pale Blue Dot” image of Earth taken by NASA’s Voyager 1 from beyond the orbit of Neptune in 1990.

The intent for the upcoming mosaic is to capture the whole scene, Earth and Saturn’s rings from one end to the other, in those particular camera filters—red, green and blue—that can be composited to form a natural color view, or what human eyes might see at Saturn. It also includes imaging the Earth and the Moon with the high-resolution camera, something not yet done by Cassini.

Three years ago, Porco and her staff members at CICLOPS began carefully examining Cassini’s planned trajectory for the remainder of its Saturn mission in search of the best time to image the Earth when it was unobstructed by Saturn or its rings, and when there weren’t other pressing scientific observations that rendered the idea impossible. Imaging any planetary body close to the Sun necessitates doing so when the Sun is completely blocked, so that no undiluted sunlight can enter the cameras or other Cassini instruments and damage their sensitive detectors. Such opportunities during Cassini’s orbital tour are rare.

When all was considered, the best time for this event was found on July 19, 2013. For several hours on that day, the spacecraft was once again going to be in Saturn’s shadow.

ALIVE ON A PALE BLUE DOT

Unlike previous images of Earth by NASA interplanetary spacecraft since the days of Voyager, this will be the first time the world’s people will know ahead of time that their picture is being taken.

“My sincere wish is that people the world over stop what they’re doing at the time the Earth picture is taken to revel in the sheer wonder of simply being alive on a pale blue dot of a planet, and to appreciate the ever-widening perspective of ourselves and our world that we have gained from our interplanetary explorations,” says Porco.

“We are dreamers, thinkers, and explorers, inhabiting one achingly beautiful planet, yearning for the sublime, and capable of the magnificent,” she adds. “Let’s celebrate that, and make this one day a day the whole Earth smiles in unison.”

Editor’s Note – mark your calendar. This is a unique moment in time, and a great way to share with children, neighbors and friends about space.