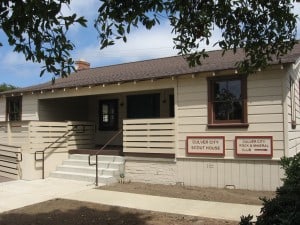 “Friends of Culver City Scout House” is pleased to announce the grand re-opening of the Culver City Scout House. The ribbon-cutting ceremony is being held on June 7, 2013. Invited guests include Culver City Mayor Jeff Cooper, the City Council, City Staff, members of BSA Troop 113 and the Culver City Rock and Mineral Club (CCRMC).
The Scout House has served the community and Culver City youth for over 70 years. In 2009, a group of concerned citizens formed the non-profit Friends of Culver City Scout House (FOCCSH) in an effort to perform much-needed repairs and save the building. Working together with City officials, the Friends came up with a plan to raise funds and perform the required renovations. The renovations were all done at no cost to the City. The restored facility is shared use, with the City receiving the majority of available hours.
Friends of Culver City Scout House express their appreciation to the following companies for their generosity of time and materials: Bravo Construction, Stock Building Supply, Timberland Tree Company, Mobile Mini and Bee Capture. Special thanks to Yours Truly Accessibility Corporation, Bravo Construction and The Architech Group for their expertise in accessibility compliance.
“Green” usage was emphasized throughout the renovation process. Existing materials were re-used wherever possible. New layout and construction materials will cut landscape water usage. The renovations have preserved the building’s rustic charms. The updated facility is attractive as a source of future rental income from both the film industry and the local community.
In addition to widespread public funding, substantial funding for the project was received from the friends, relatives and alumni of BSA Troop 113, the Culver City Rock and Mineral Club and from American Honda. The work could not have been completed without their generosity.
“Friends of Culver City Scout House” is a qualified 501 (c) (3) non-profit corporation. Their website is: www.culvercityscouthouse.org. The website for the attached Culver City Rock and Mineral Club is: www.culvercityrocks.org. The Scout House and Culver City Rock and Mineral Club are both located at 10866 Culver Boulevard.