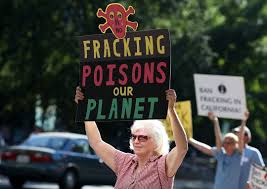 Fracking. Hydraulic Fracturing. Frankly? I’ve had it. I’m so completely fed up with Big Oil writing the rules on fracking in California, and I know you’ve also been outraged about this for quite a while. So look, this is what we need to do:

First, stop the bad fracking bill. It’s absolutely necessary to defeat AB 7 – the industry-backed bill that would allow oil companies to continue to ignore the concerns of communities near proposed fracking sites. And unlike other fracking bills introduced this session, AB 7 is supported by precisely zero environmental groups.

Judith, the power to stop AB 7 is in the hands of Assemblymembers serving on the Committee on Appropriations. Under the leadership of Committee Chair Hon. Mike Gatto, these few Assemblymembers will decide whether or not this deeply flawed bill advances. Make sure they know that all of California is watching, and urge them to vote NO on AB 7.

The author of AB 7, Assemblymember Bob Wieckowski, calls it an environmental bill, but AB 7 would actually let Big Oil control fracking in California. That’s not acceptable – make sure they know it.

Take two minutes right now to send your message to these few Assemblymembers serving on a very powerful committee – ecovote.org/fracking.

Your message today is just the first step toward protecting our families and neighbors from the potential harms of fracking, and I want you to know that the entire movement is taking this step with us.

We’re in this together with Clean Water Action and Californians who believe protecting clean water is worth the effort. We’re working with Environment California and Californians who share our concerns for public health and safety. We’re fighting alongside the Natural Resources Defense Council, the Environmental Working Group, the Sierra Club and many, many more Californians who are fed up with oil companies deciding when, where and how fracking takes place.

We must defeat this bill so that strong fracking laws can pass.

And that’s exactly where we’re headed. Defeating AB 7 clears the way for stronger fracking bills that won’t let Big Oil write the rules. These bills are also making their way through the Capitol right now – we’re tracking every detail, and we’re counting on you to be ready when it’s time to take action again.

This is the year we win on fracking, thanks to you.