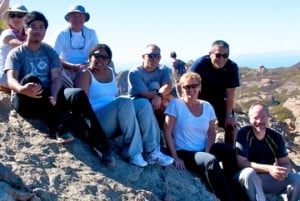 It is often said that “The Sierra Club is the oldest, largest, and most influential grassroots environmental organization.” However, that statement hardly begins to scratch the surface. On Thursday, May 9th, we will cover the amazing range of things that make the Sierra Club what it is today, and how you can get involved and make a difference.

If you were in the High Sierra on April 5th, you would have seen dozens of Sierra Club members enjoying the peace and beauty of Lake Sabrina. On the other hand, If you were in downtown Los Angeles earlier this year on February 17th, you would have seen hundreds of angry Sierra Club members marching towards City Hall, banners flying, chanting “Hey hey, ho ho, XL pipeline has to go!”

What ties these two scenes together is the Sierra Club motto to “explore, enjoy, and protect the planet!” John Muir’s famous exhortation is to “Climb the mountains and get their good tidings, nature’s peace will flow into you!” And when people explore wild places, they will naturally want to protect them. When John Muir brought President Teddy Roosevelt to Yosemite Valley in 1903, the President declared “There can be nothing in the world more beautiful than the Yosemite…our people should see to it that they are preserved for their children and their children’s children forever, with their majestic beauty all unmarred.” Three years later, in 1906, the federal government assumed responsibility for protecting Yosemite, and shortly thereafter it became one of our first national parks.

Get connected with the WLA Sierra Club at 7pm, Thursday, May 9th at Culver City’s Veterans Memorial Auditorium (Uruapan Room),