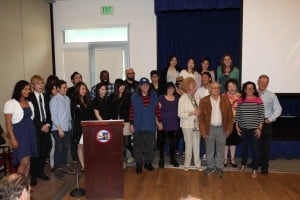 How would you feel if excerpts of your life were turned into a performance piece filtered through minds generations apart and about to be presented before a roomful of friends, family and strangers? Perhaps some combination of flattered, excited, apprehensive, curious, nervous, thrilled and awed? Maybe even a little zoned out?
Four seniors were about to find out: married couple David Katz (animator and children’s book publisher) and Judith Love Cohen (NASA engineer); Fay Litwick (marketing maven at the first Chippendales in Los Angeles) and David Jenett (WW II and Korean war veteran and Mr. Fixit on KABC radio). Starting from approximately center and ending with director Laurel Ollstein on the far right.
Shakespeare’s “As You Like It” includes a monologue with an opening line that just about everyone will recognize: “All the world’s a stage.” And on Sunday, April 14, in that special portion of the world occupied by the Culver City Senior Center, the stage was set to enjoy a live production featuring stories about four of the center’s members, prepared from interviews by students at Otis College of Art and Design.

Everyone has a story to tell. Despite that famous monologue’s opening that goes on to describe people as “merely players” and ends with a somewhat melancholy and bleak depiction of later life, LIFE STAGES, the brainchild of director Ollstein, made it clear that we can truly be stars in our own lives.

Ollstein is an active playwright/teacher/director with a production history that spans New York, San Francisco, Minneapolis and Los Angeles. She began her career as an actor  drawn to ensemble-driven companies that worked on new plays and adaptations of classic texts. She was a member of Tim Robbins’ theater company, The Actors’ Gang, for 15 years as performer and later as a playwright and producer.

LIFE STAGES grew out of Ollstein’s research interests, which include community outreach programs in theater.

His career could fill a book, including hundreds of appearances on television and radio, with three on Letterman and 19 on A.M. Los Angeles. ABC even sent him on a two-week tour of its morning television shows.

Jenett was painfully shy when he was young but managed to overcome it. The students, some of whom described themselves as shy, related strongly to this, finding him “funny, polite and confident,” qualities they felt were well worth emulating.
“Ahead of his time and creatively innovative” was a description the students applied to Katz. Samantha Wei said the interview was “a lot easier than I thought because David had a lot to say and liked talking about his experiences. He was giving us life lessons at the same time, which I thought was interesting. He really loved talking about his wife and how meeting her really changed his life because of how different they are, and after speaking with him for an hour I felt like I understood his fun character even more.”
“I was surprised that I preferred to be asking the questions as opposed to answering them,” said Katz. “I felt more guarded and I struggled with that feeling since I consider myself an open person. The interview, however, did make me think about many different milestones in my life, including my struggles and how I overcame them. Because Judith and I are married and we were interviewed by separate groups who shared with each other, they asked me about things that Judith shared, and I enjoyed talking about how we met.”
Fate brought them together at a Valentine’s Day party. “I was like a rolling stone,” he said. “I had gotten out of school at 28 but had a 21- or 22-year-old’s maturity.” The connection was instantaneous. “Meeting my wife was life-changing,” he said. “I don’t think I would have done any of the things I’ve accomplished without her. She’s a very spiritual person, all about love, community, family.”
Katz mentioned that, as an artist being interviewed by students from an art institute, he “was struck by an interesting irony. I thought about when I was nineteen and wondered what my art career would be like.” He believes that “the best way to succeed at your dreams is to have successes and failures and build upon those and get stronger.”
Cohen found it “a very positive experience to be interviewed. They asked me about my childhood and how I made decisions, so remembering these positive things made me smile. The fact that these people asked me detailed questions made me feel good that they were so interested in me. Their questions reminded me of what a hard thing it was to pursue engineering as a profession in the ’50s. They were interested in David’s role in my life: how we met, why we married and his role in our household, which were all non-traditional.”

Her advice, for which her life is an example, was “find yourself. Don’t let people around you tell you what you should do.”

Doing what she did during a time when the glass ceilings we speak of today were constructed of concrete, Cohen’s achievements were nothing short of remarkable. The students were awed, finding her to be “passionate about each part of her life, a woman who doesn’t take no for an answer, and who learned everything by herself in her own way.” They marveled at how she’d surmounted the many personal and professional roadblocks she’d encountered.
“She told us about how she got into an engineering field and how her husbands affected her education and work life,” Natta Siripattananum recalled. “It was really hard for her at that time to study engineering because there were not many women interested in the field. She said that there were only eight girls who were majoring in engineering at her university.”
“Judy was extremely easy to talk to, and after the opening question, there was almost no hitch or pause in the conversation,” Shawn Kim said. “The interview went from her early life, to work, to her personal life, to her life now with books and David, and back and forth, because there were so many questions we wanted to know. There were many surprising answers, because for someone who overcame so much adversity and became so successful, she spoke of her life relatively normally.”
Cohen, who had worked on systems that were essential to the success of the space program, recalled that she was pregnant at the time of the moon landing. She mentioned subsequent conversations with astronauts who told her that her work had saved their lives. She has also authored a series of books encouraging young girls to consider professions traditionally dominated by men.
Ellie Shin “was intimidated by her at first because she gave off the impression of a strong personality. However, when the interview started, she was very chill and relaxing. She seemed passionate about every stage of her life. Even raising her mom at the age of 10, she seemed passionate about that part of her life also. It was very inspiring to hear her stories about her generation where women weren’t given many opportunities at all. After the interview, I was inspired and motivated to not take the rights and opportunities I have for granted. I started having a different perspective of what matters most in my life. I have a passionate and ambitious drive for whatever I am striving to go for or to be.”
Four captivating word portraits were created, and in the process many life lessons were absorbed. Often dubbed “the teaching of thinking,” integrative or interdisciplinary learning is intended to expand and invest study with a purpose that goes far beyond the evaluation and memorization of information related to a topic. Clearly, for Ollstein’s students that purpose was met, and then some.
Too bad a time warp never existed, enabling Shakespeare to visit Culver City and see LIFE STAGES before writing “As You Like It.” His monologue might have taken a different direction, illuminating the senior years with the warm, positive light emitted by Sunday’s presentation.