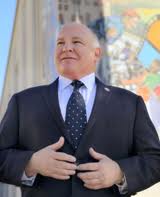 As the DoubleTree by Hilton filled on Wednesday afternoon, April 10, the local legend that the mayor’s popularity could be measured by the size of the crowd seemed to be borne out; Andy Weissman’s farewell address to the office was completely packed. There were so many tables, the buffet had to be served from another room so that all who wanted to applaud Andy’s end-of-year address could be seated. The businesses, the service clubs, the committees, the commissions and the other constellations of Culver City showed up in force.

The introduction by City Manager John Nachbar cited Andy’s “steady leadership and solid common sense” as two of the factors that helped the city’s growth in the last year.

Noting the major turnaround in the economic status of the city, he said “We are grateful to the voters, becasue without their participation, most of this could not have happened,” noting the sales tax of half a cent that passed by a more than two-thirds margin on last November’s ballot.

Hailing the opening of the Expo line, the new Culver Crossroads mall and the soon to open Culver City Mazda dealership, “Things are now moving in a better direction. ”

Offering both pride and gratitude to the police and fire departments, who answered more than 4500 calls in an average of less than five minutes last year, the mayor also focused on the new Smart911 system as a means of keeping Culver City safe.

He also gave kind compliments to the rest of the council, “working with these four spirited individuals, we are all proud of the things we have been able to accomplish together.”

“We depend on everyone in this room to make Culver City what it is and what it can be.” Considering the size of the crowd, the city has a lot of support and a lot of very strong supporters.

As the mayor finished his address, the room rose for a standing ovation. Some of the loudest applause came from the table of former mayors, where Jozelle Smith, Richard Marcus, Alan Corlin, Scott Malsin and Ed Wolkowitz seemed to have both insight and appreciation for a job well done.