“This has been a long time coming, and I’m delighted to say we start today.” School Board President Kathy Paspalis stood in the middle of the broad sweep of Helms Field with a smile as solid and sincere as the white hard hats hung on the shovels resting in the dirt behind her.

Culver City Unified School District and Balfour Beatty Construction broke ground on April 10 on a new athletic complex at Culver City High School, and the other board members present, including Laura Chardiet, Karlo Silbiger, Pat Siever and Nancy Goldberg, were pleased to hoist a shovel with School District Superintendent Dave LaRose to commemorate the start of the process.

With some short speeches from Paspalis, LaRose and Coach Jamal Wright, everyone was pleased to begin the long-awaited process towards the new field. The obvious missing face was Coach Jerry Chabola, who was out of town and couldn’t be present.

“I know Jerry is here with us in spirit,” said Paspalis ” because we would not be on our way to start this off if not for his enthusiasm and long term encouragement.” 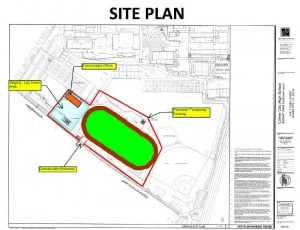 The project will include:

The project is expected to be completed by September 1, 2013.