On Sunday, thirteen current and former Culver City Little League players participated in the Major League Baseball and Reviving Baseball in Inner Cities (RBI) baseball clinic. 200 young boys and girls from programs throughout the Los Angeles-area were invited to participate. 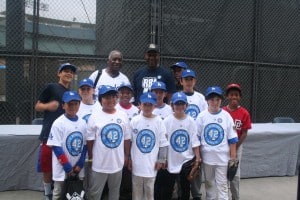 Jim Hill emceed the event, which included speeches from Newcombe, Frank Robinson, and Sharon Robinson, Jackie’s daughter. Sharon Robinson reminded the youth that her father did not just break the color barrier just for African Americans, but rather for baseball players of all races. Robinson continued, “”My father was very devoted to young people and development, as is our family, so to see them come out and be on a big league field as little children, I hope they’re inspired that they can grow up and do whatever they want to do.”

The 200 lucky boys and girls then split into groups where they were instructed by local high school baseball stars on the different facets of fielding, throwing, running and hitting.

The RBI program is a MLB youth outreach initiative designed to give underserved young people and communities the opportunity to play baseball and softball, encourage academic success and teach the value of teamwork and other important life lessons.