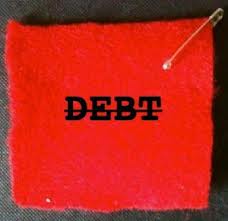 Pretty simple idea. The beautiful thing is that debt gets sold to debt collectors for pennies on the dollar so that the collectors can make a profit. This means that buying a $1 million of debt costs only about $100,000.

Which is exactly what Operation Rolling Jubilee did. The group announced Friday, March 8 that they’ve completed a major round of debt purchasing worth $1 million in medical debt. They purchased the debt of over 1,000 people, each of who owed an average of $900 in medical bills. Those people are now all receiving pink envelopes in the mail—but instead of collection notices, the letters are notifying them that they’ve been absolved of their debt.

We committed to buying medical debt first and foremost, wanting to call attention to the profound inhumanity and inequity of our for-profit healthcare system. We have spent a great deal of time learning about the medical debt market, and the healthcare industry at large. It is an industry designed to confuse, overwhelm, and exploit.
…
Our health care industry reflects all that is wrong with the world today: a basic right (the right to take care and be taken care of) has become a commodity. People are made to suffer twice, first from injury or illness and then financial extortion. We are all forced into debt while private insurance companies, banks and real estate moguls profit off of our misery. We refuse to accept this.

Alex Moore at DeathandTaxesmag.com reports that even with a strategy making such an immediate impact, the group says it’s not naive enough to think it can solve the inequities of American debt through Rolling Jubilee alone: “But we are not naive. We know this won’t fix a broken and unjust system. …We want to use the attention these buys will generate to have an impact on the struggle for real, free, accessible healthcare for the 99%. There are real solutions being proposed as alternatives to Obama’s Affordable Care Act: a single-payer healthcare system would save the U.S. $400 billion dollars every year; even just expanding Medicare to all would save $68 billion by 2020.”

And they’ve got a lot more than another million in debt-buying power up their sleeve. The group is planning a week of action starting March 16 to raise awareness around its next efforts.