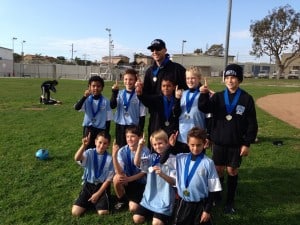 The Culver City AYSO Boys U10 Extra Team won first place in the Section 1 playoffs this weekend. They were undefeated in 4 games against North Redondo (9-2), North Torrance (7-0), Westchester (2-1), and Pacific Palisades (5-0). It was the culmination of a season that began in August. The team went into the playoffs seeded in first place because they won the fall Extra League season, and with this weekend’s four wins they maintained that position to advance to the Section Playoffs on March 2nd and 3rd in Riverside. Culver City parents Matt Brown and Dave Stewart serve as Head Coach and Assistant Coach for the team.