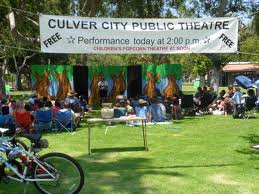 At the annual Cultural Affairs Town Hall meeting,the crowd in the council chambers on Tuesday Jan. 8 was not large, but it was a tremendously talented and enthusiastic gathering. Representatives from venues such as the Wende Museum, the Culver City Historical Society, New American Theatricals, Culver City Public Theater and the Maxwell Alexander Gallery were all there to bring the Cultural Affairs Commission up to date on what they did last year, and what they look forward to next year.

Both new commissioners Regina Klein and John B. Williams asked some insightful questions of the speakers, and longer-term commissioners Michelle Bernardin and Marla Moosed were frequently thanked by the reps from the organizations who came forward to speak. Chair Gayle Smashey graciously handled microphones and questions, and kept everything moving.

As with any Town Hall, the focus was wide and deep. but the budget blues were everywhere. Matthew Hetz of the Culver City Orchestra noted that while all the funding for the arts had burned down to ashes, “It will be interesting to see what phoenix arises from these ashes.”

The Actors Gang and the Kirk Douglas Theater both offered the financially friendly option of the classics, with Eric Sims of the Douglas noting the success of their holiday show based on Charles Dickens’ famous short story A Christmas Carol. “Everyone loved it, it was a big success and we don’t have to pay Dickens a thing. It’s free.”

The Actors Gang will be starting a tour of Tartuffe, Moliere’s masterpiece, and continuing with Heart of Darkness by Joseph Conrad. It was also noted that the Gang was” being looked at as a national model for educational programs, working with youth, using theater as a tool.” Their ongoing success as a part of the Front and Center theater program with the Culver City Unified School  District will continue in 2013.

With Susan Obrow (Performing Arts and Special Events) and Christine Byers (Public Art and Historic Preservation) representing the city’s staff, it was clear that while funds were low, creativity was still high.

The Culver City Arts Foundation offered that they are looking for more support, and they can be contacted through the city’s website.