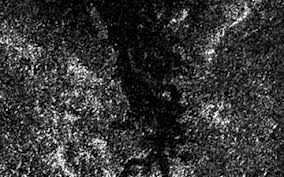 CASSINI SPOTS MINI NILE RIVER ON SATURN MOON – The international Cassini mission has spotted what appears to be a miniature extraterrestrial version of the Nile River: a river valley on Saturn’s moon Titan that stretches more than 250 miles from its “headwaters” to a large hydrocarbon sea.

It is the first time images have revealed a river system this vast and in such high resolution anywhere beyond Earth.

Scientists deduce that the river is filled with liquid because it appears dark along its entire extent in the high-resolution radar image, indicating a smooth surface.

“Though there are some short, local meanders, the relative straightness of the river valley suggests it follows the trace of at least one fault, similar to other large rivers running into the southern margin of this same Titan sea,” says Jani Radebaugh, a Cassini radar team associate at Brigham Young University.

“Such faults—fractures in Titan’s bedrock—may not imply plate tectonics, like on Earth, but still may lead to the opening of basins and perhaps to the formation of the giant seas themselves,” she adds.

Titan is the only other world we know of that has stable liquid on its surface. While Earth’s hydrologic cycle relies on water, Titan’s equivalent cycle involves hydrocarbons such as ethane and methane (which we know as natural gas).

Cassini’s visual and infrared mapping spectrometer confirmed the presence of liquid ethane at a lake in Titan’s southern hemisphere known as Ontario Lacus in 2008.

“This radar-imaged river provides another fantastic snapshot of a world in motion, which was first hinted at from the images of channels and gullies seen by ESA’s Huygens probe as it descended to the moon’s surface in 2005,” says Nicolas Altobelli, Cassini Project Scientist for ESA (the European Space Agency).

Titan (or Saturn VI) is the largest moon of Saturn. It is the only natural satellite known to have a dense atmosphere, and the only object other than Earth for which clear evidence of stable bodies of surface liquid has been found.

Titan is the sixth ellipsoidal moon from Saturn. Frequently described as a planet-like moon, Titan has a diameter roughly 50% larger than Earth’s moon and is 80% more massive. It is the second-largest moon in the Solar System, after Jupiter’s moon Ganymede, and it is larger by volume than the smallest planet, Mercury, although only half as massive. Titan was the first known moon of Saturn, discovered in 1655 by the Dutch astronomer Christiaan Huygens, and it was the fifth moon of a planet apart from the Earth to be discovered.

The Cassini-Huygens mission is a cooperative project of NASA, ESA, and ASI, the Italian Space Agency. NASA’s Jet Propulsion Laboratory, a division of the California Institute of Technology in Pasadena, manages the mission for NASA’s Science Mission Directorate, Washington. The Cassini orbiter was designed, developed and assembled at JPL. The radar instrument was built by JPL and ASI, working with team members from the United States and several European countries.