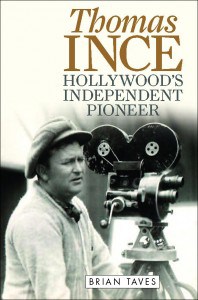 A “Meet and Greet” with author Brian Taves, film archivist with the Library of Congress since 1990, will be hosted by the Culver City Historical Society on Saturday, December 8 at 2 p.m. in the Archives and Resource Center. Taves’ book, Thomas Ince Hollywood’s Independent Pioneer, the first ever written about Ince’s life, describes how he revolutionized the motion picture industry through developing the role of the producer. Taves will show a DVD of a tour of the former Thomas Ince Studios (now the Culver Studios lot), will describe the writing of this work, and will sign books, available in book stores, to those who bring them that day. The ARC opens at 1 p.m. and Taves will begin his presentation at 2 p.m.

The book has been named to the “ten best” film books of 2011 on Huffington Post; was selected by Turner Classic Movies as their “book-of-the month” for January 2012, and has received praise from many institutions. Author Herve Dumont commented that “For more than a half a century, film historians all over the world have been awaiting an authoritative and scrupulously researched biography of American film mogul Thomas H. Ince. Brian Taves has achieved this formidable task, patiently researching in the remotest archives in order to give us a vivid and convincing portrayal not only of a neglected filmmaker, but of his flourishing film company and his independent studio. A must for any cinephile’s library”

Taves is also the author of over one hundred articles and books such as P.G Wodehouse and Hollywood; Screenwriting: Satires, and Adaptation; The Romance of Adventure: The Genre of Historical Adventure Movies, and Robert Florey: The French Expressionist.

The public is invited to enjoy this free program in the ARC space in the Veterans Memorial Building at 4117 Overland Blvd. in Culver City. Entrance is through the back of the building near the parking lot. Seating is limited.

For information, call (310) 253-6941 or leave a message at [email protected]. Please visit our Website at www.culvercityhistoricalcity.org for updates.