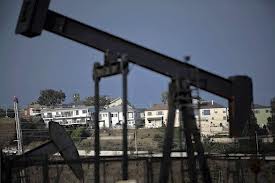 Not all quakes are the work of Mother Nature. On Tuesday, November 26, SoCal Connected correspondent Jennifer London updates last season’s investigation into fracking, the controversial drilling procedure of extracting oil and gas by injecting highly pressurized water, sand and chemicals into cracks and then re-injecting waste water back into the earth, and how it may be responsible for triggering deadly earthquakes on the West Coast.

London speaks with a Division of Oil, Gas & Geothermal Resources (DOGGR) representative as well as Josh Fox, whose Oscar-nominated documentary Gasland, helped bring fracking to light. Fox is now turning his attention to the areas like Inglewood, Baldwin Hills and Whittier, a few of the largest urban oil fields in the nation–that also happen to sit on major fault lines– to help expose the connection between fracking and earthquakes.

As SoCal Connected reported last March, one of the challenges is that without governmental regulation of fracking by DOGGR and/or cooperation from the oil and gas industry, Southern Californians won’t know if the next earthquake that strikes could have been avoided.

Watch this clip or tune in to KCET on Tues. the 26th – and write to your representatives letting them know ho w you feel about unregulated fracking – dl.dropbox.com/u/15143784/fracking-clip.mov